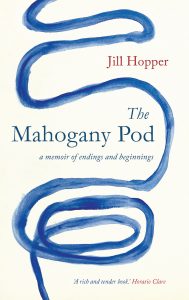 Billed as a memoir of beginnings and endings this is the first book by Jill Hopper, a London based freelance journalist. It joins the growing number of personal accounts of loss and grief such as Joyce Carol Oates’ A Widow’s Story, or Megan O’ Rourke’s The Long Goodbye. Collectively they beg the question of why we write about grief, why we decide to make the private public.

The Mahogany Pod was written more than twenty years after Hopper’s particular loss of her boyfriend Arif, who died at 25 within months of their meeting from a terminal cancer. Their love developed in pace with the accelerating decline in Arif’s health and throughout difficult medical treatments.

So unlike O’ Rourke’s  and Carol Oates’ memoirs, which were written organically, in direct response to the events being experienced as a means of coping, Hopper wrote hers own after a considerable time lag. Now in her forties and married with a small son, she has kept the letters Arif wrote to her in a shoe box in the loft; apart from these a mahogany seed pod is the only other tangible object she has as a reminder of him. There is more than a hint of the exotic, indeed the sublime about Arif. His name means ‘Enlightened one’. He picked up the mahogany seed pod, still intact during a trip to Africa before they met.

Coming across the seed pod in ‘its hiding place’ one day the author begins a reprocessing of the relationship and its circumstances. Much of this unfolding story is moving. Hopper deftly evokes the spirit of the times through descriptions of movies they saw together, of songs they listened to, of what they wore and how they decorated their house. She captures the sense of excitement and open-endedness of that period of life and of the intensity of first deep love.

However, despite the evident intensity of feeling and a desire to communicate this to the reader, the writing of it feels oddly flat and trapped in the near sightedness of youth. Current practical details can obscure the longer―term emotional significance of what was clearly a formative and enhancing relationship, and one which has been a pervasive influence in her life to date.

We know from the opening pages  there is unfinished business between Hopper and Arif’s Polish mother, Ewa, whose apparent unawareness of the depth of her son’s feeling for his girlfriend led her to clear out all of the belongings from their shared house, apart from the pod, without any discussion.  When Hopper eventually meets Ewa again she is both able to speak of her resentment but also emotionally acknowledge Ewa’s simultaneous loss of a loved son. Consequently Hopper ‘feel[s] ready to let it go.’

But Hopper also learns that rather than being Sri Lankan—the pair of them dreaming of a visit there together―Arif’s estranged father was in fact from Pakistan. And the titular mahogany pod, turns out not be mahogany after all. Such hints of disjunction could have provided an opportunity to consider some of the more intangible and complex aspects of grief—universal themes of cause and effect, of relationship and of the role of memory in meaning making. While the detailed re-living of a young and truncated love can be shared at face value, this memoir misses opportunities to probe and interweave together  beginnings and ends which contribute to the author’s present.

Clearly the potent interaction of new love and youthful encounter with death was both traumatic and pivotal.  Under the shadow cast Arif is left, for the reader at least, an idealised figure, immortalised in the first blossoming of a relationship. The Mahogany Pod, as a result, is like that seed pod; kept hidden, it retains a dormancy, something with the power to have become more.