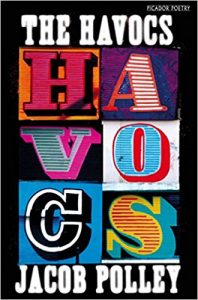 The Havocs is Jacob Polley’s third published collection of poetry. This ensemble of poems displays an eclectic mix of styles and draws inspiration from sources as diverse as Anglo-Saxon poetry and the work of Northern Irish poet Tom Paulin. The collection is unified by the poet’s insightful reflections on universal human concerns such as love, fear and faith.

The opening poem, “Doll’s House”, examines domestic life as if it were a doll’s house that could be looked in on from a child’s perspective. Polley appears to suggest that existence is in some form synthetic and must be imbued with meaning; he describes a dinner table scene with “chairs around a paper fire” and notes that “blinder faith must still provide/the mincemeat in the wooden cakes”. In the final stanza he asks “What happens if you turn away?” as if pondering whether this static world will come to life when it is no longer being watched.

The title of the second poem, “Hide and Seek”, also alludes to childhood. The poem unfolds like a riddle in which the reader is challenged to discover firstly where the speaker has been hiding, and then ultimately to whom or by what they are being addressed. The solution is elusive; an extensive list discards a variety of suggestions as to whom or what may be the speaker, where they are located or what actions they have performed. These suggestions begin rather simply: “I wasn’t in the chicken coop”, but become rather more obscure: “I wasn’t in the snapdragon’s mouth/or under the heap of severed heads”. Polley again takes an innocent experience of childhood and adds an unexpectedly dark edge.

“An Empty House”is a short self-reflexive piece on the nature of poetry. The poem consists of a series of questions that reflect on the relationship between poetry and an empty house. The first two lines debate this relationship: “In poetry, an empty house is ominous./Is an empty house in poetry always ominous?”. Polley notes under the title that this piece is “after Tom Paulin”, a poet who has explored the nature of his art in his own poems, and in his book The Secret Life of Poems. Polley reconfigures the syntax of the opening line several times to demonstrate how different meanings can be produced. The poem ends with the line: “Always is an empty house, ominous in poetry” repeated like a mantra. In doing so Polley is suggesting, perhaps, that a poem ought to strive to be unique.

The Ruin takes its name from an Anglo-Saxon poem that, due to a damaged manuscript, exists now only as a fragment. Polley rebuilds the poem, adopting and exploring its theme of a lost great civilization through the crumbling remains of one of its ornate buildings: “What was built by strange smiths, skilled in stone,/is burst, underdug, eaten down by age”. Like the anonymous poet of the original Old English poem, Polley’s interest lies in the people who built this structure: “What happened? Ruin already had root. Plague came, within/and without. No one, however high, whatever wit,/was spared.” Like its Anglo-Saxon predecessor, this poem appears to be a reflection on the transitory nature of human existence.
Polley’s The Havocs is an engrossing read. The poet’s fusion of styles and the diversity of his inspirations allow the collection to remain refreshing until the end. This collection would certainly be a worthy recipient of the 2012 T. S. Eliot Prize for Poetry; Polley explores elements of the human condition that readers of all tastes and demographics should be able to relate to in some form.