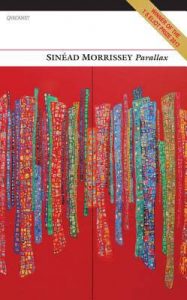 Parallax is an astronomical term for the apparent displacement of an object caused by a change in the point of observation. In this wide-ranging collection of the same name, short-listed for the 2013 Forward Prize, Morrissey considers from different angles how our position affects what and how we see.

In several poems, Morrissey’s lens is taken from the visual arts. She writes about film, photography, Scandinavian television crime dramas, paintings, even a jigsaw. In “Photographs of Belfast by Alexander Robert Hogg”, she writes

of a porterhouse roof
beside a streetlight
might produce

Her interest, like that of the photographer, coalesces around the power and capacity of art to come at things “slant”, to “fix” moments in time, and in so doing, to impose a particular perspective. In “Fur”, a poem about Holbein’s painting “The Ambassadors” in which he shows the skull at a strange, skewed angle, Morissey writes,

Too obvious a touch

to set the white skull straight. Better
to paint it as something other: driftwood
up-ended by magic from the right-hand side

Perspective has the power to change the perceived nature of material objects and, by extension, to change perceptions of “truth”, ”memory” and “history”.

Nothing about this collection is too obvious. It is both intriguing and surprising in its range, from childbirth to a communist party bric-a-brac sale in Belfast, from the journal of Dorothy Wordsworth to “The Mutoscope” of the Victorian peep-show. In this poem, the rhythm and rhymes evoke the gathering speed of the mutoscope as it brings the static images to life using movement and light:

Only for you do the two mute girls on stage
who falter at first, erratic as static

in the synaptic gap between each image,
imperceptibly jolt to life-
grinning, tap-dancing, morphing into footage,

their arms like immaculate pistons, their legs like knives…
It lasts a minute, their having-been-written onto light.

Imagery, lyricism and energy are never sacrificed by Morrisey for the sake of concept. Technically, this is a most assured collection. Several poems are written in couplets or tercets, and there are sonnets and shape poems, including, “Through the Eye of a Needle” and “Fool’s Gold”, both delicately taut and controlled, for Morrisey’s control has a deftness and lightness of touch about it. In “A Day’s Blindness”, for example, she writes:

He stood up to carry his plate and cup
to the sink and couldn’t see.
He sat back down. The clocks
went on consuming Saturday.

He would have needed practice
at being blind to pretend to be sighted.

Morrisey writes about birth, death, illusion and reality, from the apparently straightforward “truths” of a child’s perspective to the deliberate distortion and manipulation of Soviet Russia, where people were “disappeared” from photographs. A strong thread running through the collection is the artifice of art and, by implication, of humanity, in trying to “fix” a moment or capture a particular “truth”. Deception, whether deliberate or unwitting, is often an element of perception.

Even in the touching sequence of poems about her young daughter, the child in her enthusiastic, energetic garrulousness, is perceived by the worn-out parent as,

like a businessman
on the last train home
after one too many espressos,
selling you his dream.

The concept behind Parallax provides a fascinating underlying unity so that the whole collection becomes much more than the sum of its individual poems. It opens with journal writing and ends with blogging, and in between there are philosophy, politics, humour and pain. Appealing to both the intellect and the emotions, this is a collection I will return to again and again.