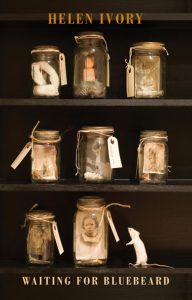 Visual artist and poet Helen Ivory’s fourth collection makes a statement which appears to ink its colours strongly on her arrestingly beautiful cover. Her series of poems “tries to understand how a girl could grow up to be the woman living in Bluebeard’s house.”

Arranged chronologically, the significantly longer section, Part One,examines that life prior to that fated encounter. Ivory possesses a powerful narrative voice, as richly compelling and intriguingly visual as her cover artwork. She conjures a childhood, part remembered, part dreamed, that is woven from a seamless fabric of the domestic, the nightmarish, the surreal and the religious. Tapping into a certain collective folk consciousness, her threads cannot be easily (or perhaps usefully) picked apart. Influences of her mentor George Szirtes are readily discernible.

If a person is the sum of her parts
then let there be no more of me.
Unhinge my ribs, unbutton my vertebrae
pull each slow thread
till I am spider-writing on a gridded page.

Posed early in Waiting for Bluebeard, this seems a keynote cry. The over-arching aim is one we all must ask: what leads any woman to a Bluebeard’s house. Is the query answered? Somehow, the hallucinatory qualities of the verse fluffed the more visceral hit that I craved. Initially at least.

we saw little with our button eyes
and spoke even less with our stitched-up mouths.

The imagery of sewing, like that of dolls, electricity, bones and paper is sustained and developed throughout the collection. An essentially hostile, and disturbingly complicit environment is evoked in phrases such as, “What the Sea said”, “What the Snow said” and so on. The systematic symbolic coding of Plath has a trace here. Not only do natural phenomena conspire, consider the series of responses –“one day the shed bit his eldest on the heel of her hand […]”(“The Story of the Shed”), one of four short prose poems. Every poem hooks cleverly to the next, anchoring and driving the narrative. We have a strong sense of the girl; we know her mother and her role … and even her grandmother “who sewed the eyes on these dolls”. Yet it is rather longer before we meet her father,
“he cried oil, bled oil, drowned in oil”, “and his face wore the aspect of moonless dark.”

Even amongst the stellar, the bizarre and the subliminal, there are memories which will resonate for many readers. ”Quarantine” recalls the experience of calamine lotion-doused chickenpox, and the words “my shoes turned to glue”, though threaded with horror, also contain a simple memory of childhood shopping trips – perhaps horror enough. Equally, amidst the strange and surreal, there is also humour. Of her grandmother’s impending death, the child wonders, in “Another 3am call”

So pervasive and persuasive is the oddly-tuned imagery throughout that that grandmother’s dementia-led behaviours become normalised. Here perhaps, we have the real strength of the book. Ivory has managed to get under childhood’s skin, and expose a different truth: remembering what it is like to half-understand, be offered part-truths, and to be able to see only through the prism of one family’s life, with all its inherent oddities, sinister or otherwise. So, if initially, I did not love this collection as I felt I ought to, with repeated readings it convinced me otherwise. Perhaps I had started with the wrong question. This book does not really ask what takes a girl to Bluebeard. Instead, it explores the collected forces which could take any woman there and wonders that more do not share that fate. Ivory’s achievement may lie in asking how we stop our daughters from crossing his threshold. Dedicated to those who have spent time in Bluebeard’s house, this collection must also hope to reach those women now twisting thinned wedding bands, like a

ghost of the moon
among the soapsuds.