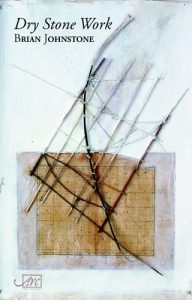 Brian Johnstone’s third collection, Dry Stone Work, is prefaced by a quote from Nobel Laureate, Orhan Pamuk: “The stones we writers use are words…” The collection is then divided into four sections, each named for a different aspect of dry stone walling: “Footings”, “Tracings”, “Heartings”, and “Copings”. Across the four sections, concepts of artifice and reality, culture and nature, the material and immaterial are explored in poems which take us, variously, to work, the circus, Greece, war, childhood and to love.

One of the delights of Johnstone’s poetry is the precision of his imagery. In the opening poem, “Tobacco Road”, the fingers of the smokers in the bar room are “stained lino brown” and the lives of these working men, “slid like a nip down the length of the bar”. These are wistful poems about male labour pains and the delible traces we leave on the landscape – an incomplete, overgrown railway line, glimpses of houses submerged in a reservoir, marks in the concrete of a road (“Concrete Poem”):

and this past, this one deed imprinted in the place
as clear as time will print its passing in a face.

The foundations are indeed laid in these opening poems of elements of stone, water and metal worked on by hard physical labour.

The first section also includes “The Ring Cycle”, a sequence of eight poems about circus performers, starting with the lion tamer in “Whip Hand”:

It’s not the teeth, the jaws I fear but seeing

deep into their eyes, each pupil blank
as every pitch
we quit, lifeless as the ground we pack so hard.

Johnstone makes these few lines work hard, squeezing out multiple allusions – the fierceness of the lion, the lion tamer’s fear, the bleakness of their existence and the hard-stamped ground they leave behind.

The other poems in the sequence take us to circus acts: the high-wire, the strong man, clown, human cannonball, trapeze artiste, knife-thrower and ringmaster. The second section, “Tracings”, comprises more personal poems, several about childhood – from memories of school milk, camping trips, and Edinburgh’s Southside Joke Shop with its stink bombs and itching powder, to Dr. Who and the Bash Street Kids. In the third section, “Heartings” there are poems of places and people which stir the heart– Crete, London’s Foundling Museum, and places associated with war, from sappers’ tunnels to Craiglockhart Hospital. “Copings”, the final section, offers poems of life and death, light and dark, and the love that helps us cope. Throughout the collection, there are evocations of the intangible – memories, history, illusions – beyond the surface traces. In “Behind Your Eyes”, for example,

..welling up from somewhere
you have been, you think, before but
did not know it, did not recognise the moment

that takes you now by something more
than just surprise; like something living, palpable,
that rustles in the underbrush, hides behind your eyes.

Johnstone’s poems range widely in subject matter but the collection coheres. This is provided in part by the consistent musicality of Johnstone’s writing. The poem, “Dry Stone Work”, for example, opens,

Teamwork, you said and grabbed the corner
of the sack.
Too late. My tensing back,
unused like yours to working with its hands,
went crack, as strain was felt and slack
was taken up.

Throughout the collection, the internal rhymes and rhythms lift the poems off the page. Some of Johnstone’s poems allude to specific musicians – jazz saxophonist, Sonny Rollins, for example, “riffing/amongst the girders” on the Williamsburg Bridge. “Surfin’ Safari for a Small Town Boy” features the Fife seaside town of St. Andrews as aCalifornian surfing beach, incorporating the Beach Boys’ song titles.

Dry Stone Work is a beautifully produced collection, right down to Will Maclean’s lovely cover image, in which both darkness and light are evoked with startling tenderness.