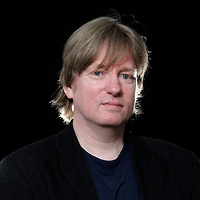 Touching, funny, pensive, self-aware, honest. Michel Faber’s discussion of his latest novel, The Book of Strange New Things was all of these. Following the story of Peter Leigh, a Christian missionary who leaves his loving wife Beatrice behind spread his faith to the alien world of Oasis, Faber’s novel is a fabulous study of love, marriage and understanding the Other. Just as fascinating as his novel was the man himself who appeared on stage, holding little resemblance to the writer who once described himself as “compulsively uneasy” in public. While his “love/hate relationship with people” might remain, Faber seemed more at ease since his withdrawal from literary tours following the publishing of his acclaimed novel The Crimson Petal and the White in 2002. At that time, he was, in his own words “all peopled out”. He remains a quietly spoken but hugely engaging presence, whose reflections on his latest, and, sadly it would seem, his last novel, ranged from the eloquent and amusing to the deeply personal and sorrowful. Eva, his wife of twenty six years tragically died in July, a devastating loss which still simmers beneath the surface of Faber’s talk and remains understandably raw. As Faber himself put it, not only is The Book of Strange New Things a farewell to the novelistic form, it is also a very personal goodbye to the wife who inspired and sustained so much of his best writing, resulting in “one of the most sorrowful books ever written” but also, very aptly, his “most compassionate book, possibly as compassionate as it is possible for a book to be”.

Opening with a reading from the very early pages in the novel, and also presenting another, longer section at the mid-point of the session, Faber’s prose shines iridescently when read aloud, and a more expressive, invested reader couldn’t be imagined. From the beautifully observed details and mannerisms of the former habitual smoker, to wonderfully evocative phrases describing Heathrow Airport as “a playground of secular delights”, Faber’s readings transfix the listener. Listening to Faber discuss his “respect for the underlying reasons why people have faith”; maintaining a reverence for his audience and disputing the “assumption that people who read serious [literary] books must be atheist”, as “cynical” is profoundly engaging. He remains, more or less, an atheist by choice, though as he also points out, atheism cannot be a solution for surviving the “unbearable”.

Moving on to speak of how his novel deals with issues of “the Other”, Faber is once again unwilling to take the easy path, likening his wife’s terminal illness to a quote from his novel, where Peter is accused by Bea of living on “Planet God”. If the distance created in this fictional marriage is caused by Peter living on “Planet God”, then his own relationship with Eva became marked by her existence on “Planet Cancer”. It is a profound analogy, full of a quiet sense of emotion and dignity, but not one that Faber broods upon as he skipped on to compose an amusing, honest summation of his feelings about his female characters, provoking a round of spontaneous applause in the process. Why, Faber asks aloud, do women have to be thought of as “something exotic like a giraffe”; why does the male perspective be the “default setting” for a narrative? The great secret of writing women according to Michel Faber is to start with the assumption that women are just people. If The Book of Strange New Things does indeed turn out to be the last Faber novel, it will always, rather appropriately, occupy an ambivalent space in the mind of its readers, being at once brilliant but also marking, regretfully, the end point of a remarkable novelist. There is something hugely admirable about a man who has the courage and self belief to instinctively know that he might have reached the pinnacle of his powers. Ending the session, he reflects that “if one of my novels will be remembered in a hundred years, then I’ve already written it, writing more won’t help with that”. Faber is perhaps the least pretentious writer alive today, and if anyone deserves to be remembered, it’s probably him.