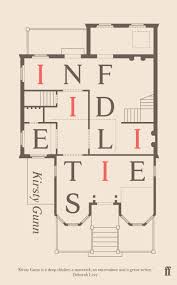 Kirsty Gunn’s latest collection of short stories, Infidelities, is a beautiful, subtle work, invested in exploring different forms of narrative and working them to form a tapestry of all the ways humans can stray from one another: physically, mentally, literally, and even in their inability to recall events in the same way.

“Memorial” explores the way we retrospectively narrativize our memories: “Not that she would ever put it this way, let alone turn it into something that might read like a story, but the fact is, when she starts thinking about the two events that seemed to mark the beginning and the end of her marriage, what she sees is one statue at one side and another at the other”. Throughout Infidelites, characters resist explicitly recording memories and instead think themselves free of them. Here, the protagonist claims she “would never put it this way”, frame her life in terms of a well-worn image and, yet, she then does so . Through hesitation and narrative shift, Gunn deftly represents thought patterns, weaving regret, hope and delight together.

One of the most interesting stories in the collection, “Tangi”, is focused on an infidelity that is not romantic, but cultural. Gunn is interested here in speech, specifically in colloquialisms and accents, and the ways in which they represent taboo. Told from the point of view of a child whose parents are distant from her maternal grandmother, we experience the sharp linguistic shifts between worlds:

“I learned everything from my Nanni then… As the house in its garden was, with its ferns and the tangled bush in the back gully, hiding its river like a cool secret…”

But her daughter, who is shocked by her relationship with a Maori woman, ostracizes Nanni. The approbation manifests through disgust at Nanni’s colloquialisms: “ ‘Oh yeah?’ she might answer then and with other ways of talking that my mother really hated…” The narrator, her granddaughter, mourns the loss of her Nanni, and her speech patterns, reflecting, in her Nanni’s remembered patois: ‘its not so much as finding the secrets, girl, as understanding where the words come from that makes a person who they are”.

The first short story in the collection “The start of it …” contains the line, uttered by a friend of the narrator: “No one reads short stories, anyway,” the man points out. “No one thinks there’s enough going on.” What is fascinating is that Gunn eliminates broad plot – as is traditional with the short story – to focus on complex interiority that produces a far more concentrated insight into the human condition. There is something of A. L. Kennedy’s poetic neuroticism in these stories, but Gunn is a more controlled hand in some ways.

Whilst the human mind – its alleyways – is at the heart of Gunn’s collection, the settings of the stories are also lovingly detailed. In “Elegy”, telling the story of a terminally ill woman’s final journey to her old house in London, where she hopes to find closure, London is absolutely luminous: “The flowers had all come home to roost in the Magnolia trees along the Euston Road. It was springtime in London.”

Gunn has a lightness of touch and a narrative ingenuity previously established in her fiction, such as The Big Music. It is wonderful to encounter a collection with such range around a single theme, and Infidelities is a must-read for anyone interested in the art of the short story at its best.