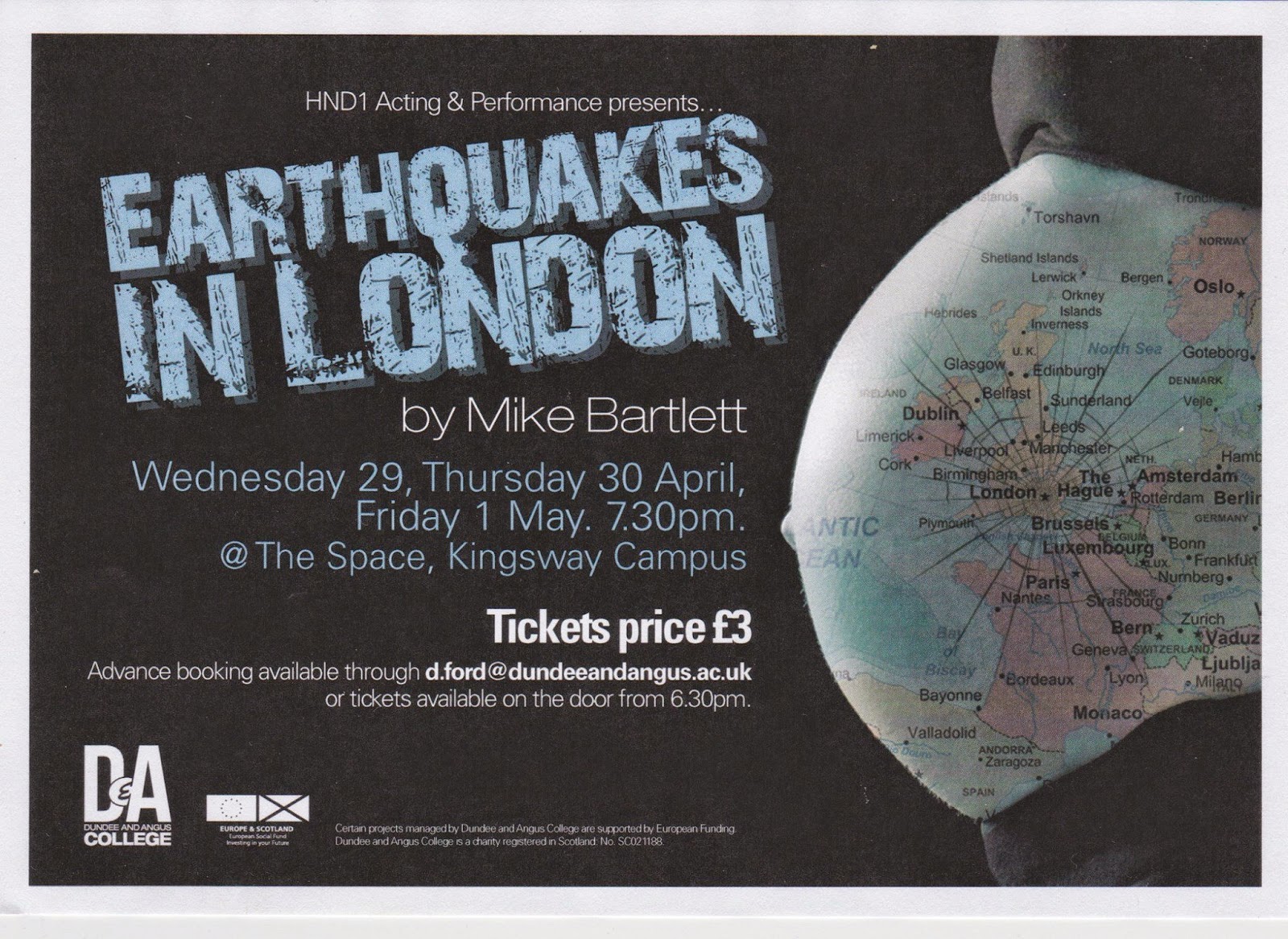 Students undertaking the HND 1 in Acting and Performance at the D&A present the fruits of their labours over the past semester – a rousing rendition of Mike Bartlett’s acclaimed script, first performed in 2010. Jane Hensey, directing, writes in the programme’s foreword of the collaborative efforts that have gone into the production, and many schools of art – acting to music, choreography to animation – are given their own spaces and opportunities to shine within the show.

Earthquakes in London sees its epicentre (ha!) focused on the intertwined lives of three sisters living and working in the capital, each facing conflicts both with the world around them and within themselves. Cabinet minister Sarah (Jade Anderson) is torn over plans to expand London’s airports, trying to balance the country’s economic prospects with the environmental costs of more flights. Secondary school teaching assistant and mother-to-be Freya suffers from severe prenatal depression, anxious about her child’s future in an uncertain world. And sullen teenager Jasmine (Taylor Dyson) has adopted a seeming nihilistic view of society, engaged in a carefree lifestyle of clubbing, drinking, and liberal sexual encounters.

The most striking element of this production’s composition is the decision to have the actress portraying Freya change between each of the play’s first four acts (of five). Starting with Summer-May Bastinelli in the role in Act One, the first changeover to Angelina Bojczuk is conducted onstage, beneath the blatant glare of spotlights. This prepares the audience for the subsequent changes as well, to Abbie Gilruth in Act Three, and Iona Townshend in Acts Four and Five. In spite of being quite disparate in their physical appearances and voices, the four actresses succeed in maintaining a strong sense of Freya’s character between them from the first scene to the last, united in conveying her gait and language and mannerisms, and bridging the transitions between them with no loss in credibility.

As the plot lurches from the Swinging Sixties to the year 2525 via the present day, and other dates in between, the other members of Earthquakes’ company are equally adept in supporting the leads. Jennie Fogg stars with a great comedy turn as Peter, one of Freya’s more unruly students, who likes to follow her about with wisecracks and persistent questions. Lorne McNaughton channels more than a hint of Matt Smith’s raving, soliloquising Doctor Who as the sisters’ father Robert – a former climate scientist and “well-paid” airline company advisor, who has turned into a bitter and cynical doom-monger in his old age. And Robert Oakes provides a memorable character arc as Sarah’s (initially) timid and long-suffering husband Colin.

To paraphrase the stereotype of British weather: if you don’t like what you’re seeing on stage, fear not – it will soon change. This is a play with a bit of everything in it. In the opening scenes the stage has distinct areas where each piece of dialogue or action occurs, but they soon blur and overlap one another. A “pool” of blue tarpaulin rolls out in the centre, and a barbershop quartet of swimmers, resplendent in trunks and swimming caps, sing as the protagonists walk by. A sinister troupe of black-shawled women circle Freya with their prams, like prairie wagons, as her due date approaches. Jasmine is a sensual burlesque dancer, a petulant little sister arguing with Sarah, and a vodka-soaked mess in the space of mere minutes.

At times the action is hard to keep up with, and its underlying ecological message occasionally threatens to preach, especially during the final act; however, these short moments never overwhelm the overall spectacle. Moreover, the image that left the greatest impression was an ultrasound animation with a horrifying twist, courtesy of Ross Donaldson on the production’s artistic effects team. Earthquakes in London looks every bit the product of fifty-plus contributors and five months’ work – a show of seismic proportions.