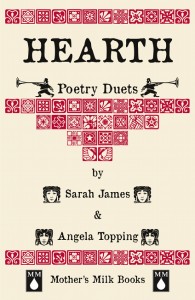 In Hearth, prize-winning poets Sarah James and Angela Topping have co-created an engaging sequence of “poetry duets”; paired poems that echo and spar, diverge and re-convene in that common ground of home, hearth and memory. Only the first and last poems are collaborative; the others retain each poet’s highly individual voice, yet harmonise effortlessly. The end result is a pleasing, synergetic narrative, which speaks to the reader from every page.

Sarah James is a prize-winning journalist, fiction writer and poet. Her latest poetry collection is plenty-fish, which was published by Nine Arches Press in July 2015 and previewed at Ledbury Poetry Festival. A poem from The Magnetic Diaries (Knives, Forks and Spoons Press, 2015) was highly commended in the Forward Prizes, and a one-act poetry-play version of the collection was selected for and performed at the 2015 Write On Festival at Hereford’s The Courtyard Theatre.

Angela Topping is a poet, teacher and workshop facilitator. A prolific and talented writer, she is the author of seven poetry collections from Stride, bluechrome, Salt, Lapwing and Mother’s Milk Books. Hearth is her second collaboration; the first was with Maria Walker, The Lightfoot Letters shown at StAnza in 2014.

Their joint pamphlet Hearth is the first in a series of poetry duet collections to be published by Mother’s Milk Books, and plays with the idea of using everyday objects to explore the bedrock of memory and family life. It was launched at Cheltenham Poetry Festival in April 2015.

In her blog, posted just before the launch, Topping discusses the creative process of producing Hearth:

Either I wrote a new poem to go with one Sarah sent me, or she wrote one in response to mine. It was uncanny how close we were at times in the objects which had significance, although we are from different regions and of different ages. .. The poems are all new ones for both of us.

New perhaps, but each poem is also timeless and universal. One particularly effective pairing is “A Childhood in Pins” [James] and “The Button Tin” [Topping].

If we compare lines from each poem, we can see how James and Topping have explored the connection between the physicality of childhood and the shaping of memory.

From “‘A Childhood in Pins”,

Steeled bluntly against my palm
firm as the bristles of Mum’s brush
on my neck’s bared skin.

The following lines from “The Button Tin” echo this theme:

My fingers stirred the buttons.
They clattered and sang to me,
kept me happy while she sewed.

The quotidian nature of this collection sits comfortably beside a wide range of influences from Shakespeare to Ted Hughes to Mrs Beeton. Guaranteed to provoke nostalgia of the most honest and heartfelt kind, each poem is like a whiff of perfume or half-remembered name – I found myself transported back to my own childhood with each turn of the page.

But this pamphlet is much more than a simple reminiscence. There are life lessons here; chilling reminders of what it takes to be an adult. It’s about growing up and letting go.

“Crow Lines”, the collaborative piece which brings the collection to a close, is a gossipy poem conversation inspired by an old Scots ballad “The Twa Corbies’. Two sinister crows “bookend the sun”, waspishly observing the domestic chores of the neighbourhood women. As one character, Lynn, smoothes her son’s shirt from the washing line “ warm with sun-dried memories”, the crows talk of skeletons and death: “told you autumn was coming with its vampire eyes looking down the barrel of the seasons”.

Hearth is a timely nod to mortality, and a stunningly heartfelt collaboration from Sarah James and Angela Topping.