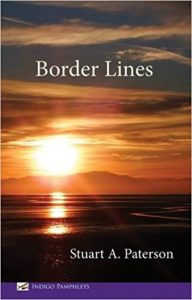 Stuart Paterson is an Ayrshire-born poet writing in both English and Scots. Border Lines is his third collection, its twenty-four poems focusing on Dumfries & Galloway’s landscape and people.

Beginning with a manifesto of sorts; “High Tide at Sandyhills” sees the world open up beyond the Galloway coastline, but ultimately the poet is unable or unwilling to swim further, over the Solway Firth and out to where England lies, preferring to float

a mere hundred yards
on gentle waves to a stake net pole,
driftwood on a fluid mirror of stars,
full as the universe, pin-pricked with holes.

This final image sets the tone for much of the collection, imbued as it is with a sense of restlessness and being at the edge of something.

Other poems hint at what lies beyond in a political rather than a geographical sense; written hard on the heels of the 2014 Referendum, “Crossing the Border” shows Paterson again entering what for him has become bandit country, the badlands over the border. The poet is caught in the troubled act of writing, yet only in the final lines do we learn what subject he is struggling with:

the heavy traffic north, lost round that
corner, the other side of yon
unsignposted junction we passed
40 minutes & a Referendum ago.

Though the poems in Border Lines are in English rather than Scots, Paterson ensures that the sense of place is fully evident throughout. He leavens the collection with delicious Scots vernacular and wonderful tongue-numbing place names (Barnhourie, Kirkgunzeon, Devorgilla Bridge) which, as the late, much-lamented Tessa Ransford observes in her foreword are themselves “crammed with poetry”.

Certain poems find Paterson in the company of men, or discussing male preoccupations, often in alehouses and bars; these are masculine poems – muscular yet cultured, exhibiting the kind of blue-collar intelligence which has to be learned through experience rather than through formal education. This is most evident in “Pub Quiz” where Barbour, a drinking companion and fellow quizzer notes that among them they have:

the individual intellects of planets

despite, earlier in the poem, asking rhetorically;

Who makes up these fucking questions anyway?

The poem concludes with the companions rationalising their ultimate defeat, but the final line, on its own,

Many poets write lovingly of home towns, or the countryside in which they are rooted, but Paterson is not writing simply for local recognition or for some whimsically parochial purpose; his poems look around to find brotherhood and common purpose, but they also look nervously and slightly dismissively to the English on the doorstep. They are occasionally tinged with sadness at something lost, or something yet to be found, possibly centring on national or regional identity. This sense is at its strongest in “From Here To Kirkgunzeon” where the writer fills his locality with extinct beasts, Jurassic Park-style, ultimately conjuring Dumfries;

sad,
slumped, wishing for mist, the past,
something bigger & more real than this.

In the final poem “At Douglas Hall”, Paterson observes the tides’ unfailing washing-ashore, seeing how they carry their own stories, ballads, ultimately even these poems. The ending of the poem and of the collection itself, is far from an ending;

tender vessels of tiny waves
bringing shallow white words & drifting
tributes ashore, washed up at
the very end & the very start of it.

Ultimately, this collection could serve solely as a snapshot of the poet’s home, undoubtedly where his heart and pen are, but it also seems restless and dissenting at times, whether relaying the superficial frustrations of defeated quizzers or the less ephemeral pain of missed political opportunities. The poems, which convey in unadorned language the grandness of countryside and coastline, might convince you to visit Dumfries & Galloway, but these are no Tourist Board verses. Deep in the heart of Scotland something has stirred, and this collection of fine poems is the sound of the rustling undergrowth.