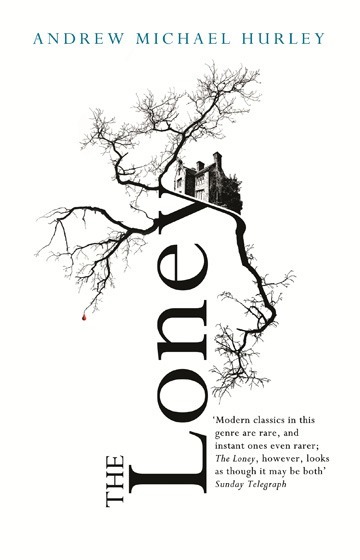 Having been coaxed into seeing a horror film at a tender age, I’ve never since been able to gain enough distance from the gothic form to relish its thrills dispassionately. That half-glimpsed face in the darkened window or the unfamiliar shadow on the landing still results in one of those sudden irrational lurches of the heart. Given The Loney to review thus felt much like drawing the proverbial short straw. And yet there is much to enjoy in Hurley’s debut novel.

Told in first person retrospective by the elder brother, The Loney recalls a momentous event in the lives of Tonto, just short of 16 at the time, and his younger brother Hanny, born mute and with learning difficulties.  Both were part of an insular and deeply religious community, bounded by fear and arcane Catholic ritual practices. At its head was a Father Wilfred, whose own blinkered faith and self-righteousness fostered a tribalised mentality: the saved within the fold, sternly policed, and the great unsaved outside, condemned as lost in darkness and depravity, and beyond redemption. Even when replaced by the benevolent Father Bernard, Wilfred’s legacy of religious conservatism persisted, reinvigorated in the actions of Tonto’s influential mother, aptly named Mummer (think Oranges are not the only fruit). Early in Father Bernard’s pastoral care, the community return to the Loney, located in the windswept North West, for a Lourdes-like pligrimmage.  But this isolated region has always kept its own local, ancient folk superstitions and macabre half-Christian traditions, hinting at an even darker, savage reality that resist easy assimilation into Christian orthodoxy or domestic suburbia.

Within the broad topographic contours of the gothic, Hurley’s handling of menace is undertaken with a knowingness, a slow burn to the fateful dark and stormy night. The house, the secret room, the history of witches, the bewilderment, alienation and curiosity of the narrator, all serve to crank up tension. Yet at times, the set-pieces end on a too self-consciously cinematic note. For example, Tonto, eavesdropping from the dark  recesses of the cupboard, is for one heart-stopping moment almost discovered by the eavesdropped who “turned as through he had seen… [the boy’s] eye in the crack”. Later a damaged seagull, inexplicably healed by the mysterious wheelchair-bound girl, is depicted as having “lifted off silently, rising, joining the others turning in a wheel under the clouds”, and an effigy mistaken for a man hanged is made to disgorge its schlocking fleshly secret. The novel’s northern landscapes, shrouded in fog, rain and cut off from the mainland, recall the windswept salt marshes in The Woman in Black but Hurley does take more care, making his bleak, wet, grey and weather-beaten heath and Cumbrian seascape of Coldbarrow come alive as a wild, brooding and menacing presence, the domain of the literary sublime beyond human ken.

Yet what draws me most to this novel is not its genre delineations, no matter whether accomplished or a little clunky, but the human and familial drama: the intensity of the relationship between the young Hanny and Tonto, the avuncular bond between Father Bernard and Tonto, and the understanding of religious mania when hallowed invincibility suddenly hollows out into helplessness, as in Father Wilfred’s epiphany at Coldbarrow.

This, possibly, is also why The Loney is not simply a gothic novel. Hurley’s version may be richly allusive, with deliberate misdirections and red herrings, all unexplained and unresolved. The past, of course, never recedes and as the adult Tonto divulges more of his troubles, the reliability of his narration is also put into question. Yet the other parts of the novel, the stories of families, relationships and faith pull it along other less genre-bound paths. Father Wilfred’s and Father Bernard’s background, Tonto’s and Mummer’s personalities are intriguing but underdeveloped, and dismissing these in confessional episodes or quick asides make for a frustrating read. And therein lies the rub. The Loney has started to have a life outside its preoccupation with horror and the supernatural. When Hurley decides to follow those other leads, I would for one be bearing a big smile and breathing a huge sigh of relief.