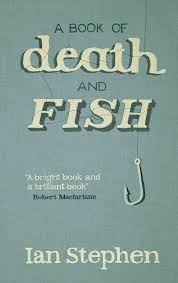 “A story unfolds. It doesn’t fall into your lap, all sorted. You miss the significant bits, or you might hoard and file details that just don’t seem to matter.” So says the idiosyncratic narrator of Ian Stephen’s wonderful novel, A Book of Death and Fish, and the author certainly follows this non-pattern of writing himself. Protagonist Peter MacAulay is – like us all – a wonderful jumbled bag of parts and qualities, gently exposed and teased out across layered stories, in this Huckleberry Finn style tale. Peter is a Lewisman, or perhaps better put, a Stornoway man: fisherman, chef, brother, historian, fixer, son, mechanic, husband, property developer, poet, religion-addict, father. This novel is a roundabout telling of his life, and that of his communities and their histories, individual and collective. Indeed, it is difficult to pin down exactly what this book is, and in so trying to do, probably lessens its impact and importance. It is, quite simply, a joy to read.

Every word in the narrative comes from the mouth of Peter MacAulay and is written in such an artless way as to make you feel as though you are sitting in the same room as him. The author throws the reader straight into Peter’s world, expecting us to keep up, not least with the language and dialect that peppers the text. And, of course, as the reader, you do catch up, and become immersed in this story-driven world. ‘That’s how I heard this tale from a Polish artist on a Swedish-speaking Finnish Island. (Did you get all that?)’, goes one illustrative opener from Peter. He recounts multiple histories, personal and collective, throughout the book, all in his redoubtable style.

Peter takes us from his childhood in 1950s Stornoway and Alloa up to his death (and beyond, in the form of his will and last testament). We learn about his family – his father the weaver, his mother from rural Lewis, and his sister, who grows up to be a nurse in Canada, becoming part of that enormous and growing diaspora of rural Scots across the world. But we also learn a great deal of the psychology of Lewis, and its history and how that imprints itself on the lives and choices of individuals and generations. The tragedy of the Iolaire features strongly, perhaps not surprising in a book dominated by the sea and fish – from catching them to cooking them. Peter also expands a great deal on religions, belief and the sociology of religion, all in the same storytelling style; take this description of attending a Roman Catholic church in Stornoway: “It was a bit fancy for me but they were all friendly enough, after all the ritual. Can’t be any more strange than what happens up the road. On the square. Honest, I’ve never been in any further than the bar. I only know what that guy Pierre told me, in War and Peace.”

The book is full of similar diversions, asides and allusions. It becomes clear that Peter is a talented writer, poet and historian, as well as an inveterate storyteller. We learn that, despite an inauspicious start as an undergraduate, he does eventually complete a doctoral thesis in History, and perhaps that is a fitting achievement for him. In the stories he tells of his life we learn much about the social and economic history of Scotland from the 1950s to the present, with a peppering of politics in there for good measure. A huge amount of detail is included, everything from recipes for the best way of cooking fish, to clothes, cars, music, the technicalities of sailing and fishing, and the weather. The book ranges geographically from the Outer Hebrides to Canada to Germany and Scandinavia and through the meticulous recording of detail and the valuing of the inner lives of people, becomes universal. Read it.