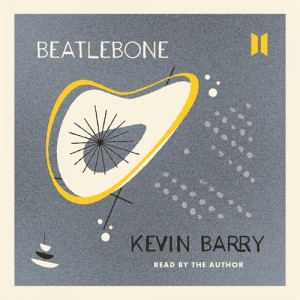 There are a lot of islands off the North-West coast of Europe, so it is easy to get lost among them, or even mislay one. In Kevin Barry’s Beatlebone, John Lennon is trying to get back to his island in Clew Bay, in the very west of the West, but has forgotten which of them he owns.

Putting Lennon in Westport in 1978 is a clever move for a book that deals with the possibilities that time offers, and how so many of those possibilities are wasted for no good reason.  The theme running through the book reflects the common Irish sensibility of time as unfolding disaster. Lennon’s island turns out to be cold and miserable, the music John imagines will never be heard, John is shot and the possibilities opened by the sixties end with the elections of Margaret Thatcher and Ronald Reagan.

Beatlebone occupies a wider geography than Barry’s previous work. Bohane is wonderfully imagined, but the sounds in it are from South Munster. The Little Kingdoms were found in the Golden Vale. The setting here is Mayo, but  the people who live in the space a long way between “Clare and here,” are the subject. Anyone who grew up listening to Ralph McTell, the Pogues and Morrissey, or watching the plays of Martin McDonagh, will recognise this space, which has its centre of gravity in the West of the archipelago but where the pop culture comes out of the East. Generically, this is a really fine exercise in Celtic Gothic and one that attends to “the matter of Britain”.

It is fun to pick up how Barry splices in the literature of Britain and Ireland and what use he makes of those inheritances. Croagh Patrick sits where it should be, and Westport does not reflect the light of Asia Minor (pace Paul Durcan), but Lennon is lost among islands, so necessarily there are echoes of other heroes. Wandering John spends the middle section of the book fending off some washed-up remnants of the sixties, screaming (rather than eating lotuses) in a ruined Achill hotel. The references to epic are balanced by the use of English social comedy, particularly a comic set-piece around a drunken night and its consequences. The treatment of Lennon’s memories of his mother uses those two literary traditions to balance out her mythic status in his life with another kind of status, that of class and respectability. She is an anti-Penelope but she is also a lower-middle class woman of Liverpool in the fifties. She made a cuckold of his father, but her individualism and taste opened the door to Pop culture. And so we come back to the theme of time and what was lost in it.

A Beatlebone, as explained in the book, is a fossil, like an elkbone, a wolfbone or a sealbone: a remnant of animals long gone, or of vanished, never-existed, possible worlds. It is also the name of the lost Lennon album that “heard once” would “haunt you fucking always”. Beatlebone, the book that is held in the hand, is like a relic of a saint. Relics, Peter Brown explained in The Cult of the Saints, exist in mundane times and in redeemed time simultaneously, allowing communication between the two, not unlike a holy, time-travelling telephone. Quietly, behind the pyrotechnics of his prose, Barry is thinking about the status of the novel as an object that exists beyond secular time and of the possibility of something beyond time travel: resurrection.