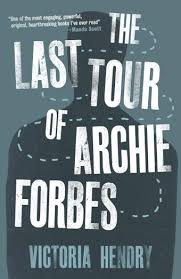 To capture the effects of war on a person, humour the reader and shed doubt upon our country’s health system are all brave undertakings. Nonetheless, Victoria Hendry has taken the plunge and succeeded in achieving these aspects in her novel The Last Tour of Archie Forbes.

Against the backdrop of the city of Edinburgh, described in such detail that you almost feel as though you’re following a map, the novel is centred around the eponymous Archie Forbes as he deals with his Post Traumatic Stress Disorder (PTSD) and with also being torn away from his son. The disorder is wonderfully placed within the story and the source of many descriptions and feelings; words such as ‘Fired’, ‘shot’, and ‘exploded’ are found scattered across the pages. If a word is associated with warfare then it highly probable you’ll find it somewhere within the text. Just as Archie finds combat in everything he sees, the reader finds them everywhere in Hendry’s language. It’s a clever ploy. It supports the theme of PTSD.

Hendry’s play with words, sounds and syntax is one of the most creative features of the novel; for example, just before one of Archie’s episodes, Hendry writes: “‘I don’t know how to say this, Archie.’ It echoed in his head. ‘Say this any other way.’ He leaned back in his chair…” Here, Hendry breaks the dialogue down so that it’s short and snappy; the slight repetition leading towards one of Archie’s episodes creates a rhythmic beat. In a clever move, Hendry transfers the tension and panic which Archie himself is feeling onto the reader. This technique also works on a bigger scale within this novel via the story of Archie’s social worker, Petal, and her own trauma. Petal’s chapters are much shorter compared to Archie’s and are placed after every three or four chapters of Archie’s narrative. Intercutting the main storyline, they mimic the ticking of a bomb, just as the dialogue above does.

However, the climax is disappointing. Hooked from the beginning, I was anticipating an epic finale but it just fell flat. An exciting plot which held the action and tension is thus rendered dry and futile. Yet while the climax may have been disappointing and unnecessary, the character of the kidnapper may not have been entirely pointless. The kidnapper, Callum, takes an interest in the broken Archie and gives him both a diagnosis and some home truths: “if he gets an outing in a war, let out of his cage and used by the state as a trick circus animal in their game of Realpolitk…” Despite his role and function within the narrative, Callum acts as Hendry’s voice here, directly attacking the government and their treatment of our soldiers.

Throughout the novel we are shown a down-on-his-luck Archie, a struggling Archie, a lost Archie, and an Archie who has to fend for himself. He has very little support and the health system fails him and his wife by disregarding Archie’s wife’s postnatal depression that is compounded by the fact that he is an ex-soldier. From this the novel may be interpreted as suggesting that a change must be made in how we treat those who fought for our country.

The novel is an artistic exploration of PTSD and one that forces our eyes to open to the world’s attitude on soldiers, the nature of trauma and depression in its different forms. It’s interesting and humorous, but does not deliver the climatic punch which some might expect in a story that could easily have included one.