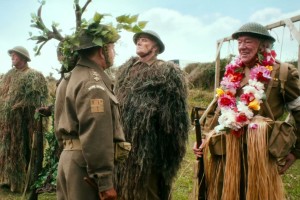 Forty-eight years after its television show introduction, Dad’s Army is a film burdened by audience expectations. It is not necessarily a remake or a re-telling, but nearly half a century later, the television sitcom that inspired the storyline is still considered one of the nation’s favourites and with that will surely come followers who would prefer the original material be left alone. For some, the film is “doomed” but for others, it is a triumph and a pursuit of sentimental nostalgia.

Set back in 1944, Walmington-On-Sea’s hapless yet devoted group of aging and flat-footed men continue their service in their local Home Guard. In a town where “don’t panic” means “panic”, the platoon are once again mostly idle – their first mission of the film involves the arduous task of ensuring the return of an irate bull to its field. However, the war is nearing its end and the platoon must do everything they can to ensure that Britain does not lose.

From the beginning of the film, it is noticeable that the episodic structure of the script sometimes causes discontinuity in the story. It gives the effect that the film is merely a compilation of scenes rather than a continuous script – which will probably not be much of an issue given our familiarity with the anecdotal nature of the series. The denouement, however, is stunted by a premature revelation half an hour in, making for a rather perfunctory resolution.

There is still no danger of the cast putting their own light out, however. Where the script falters, it is the actors who are able to hold the film together. Toby Jones’ Captain Mainwaring is by no means beneath the performance of Arthur Lowe. Although his take is considerably less harsh and pompous than that of Lowe, his representation of the character and his comic-timing is exceptional. The staging of the slapstick is faultless and shows that this film is in no way isolated from its televised counterpart – it still brings the house down.

Jones is of course accompanied by other veterans of British cinema – most notably Bill Nighy as Sergeant Wilson and Michael Gambon as Private Godfrey. Though, initially, Gambon seems to merge into the back of the scene, the occasional and somewhat vacant witticisms from his character are reminiscent of his predecessor, Arnold Ridley, but also unique and uplifting in their distribution. There is a sense of community, onscreen and off, among all: the presence of past cast members, namely Ian Lavendar guesting as the Brigadier and the return of Frank Williams as the Vicar show the united attitude and the devotion with which the film was produced.

The female cast are much more present than they were in the original series, forming part of the Auxiliary Territorial Service alongside the Home Guard throughout the film. Clad in their own military uniforms, they are zealous and definitely a power to be reckoned with. The only defect in the casting is the portrayal of the duplicitous journalist, Rose Winters, who is unfavourably played by Catherine Zeta-Jones in a manner that is marginally prosaic, stock and even dispensable.

Although the script has some minor interludes, the fact that the credits at the end of the film are based upon that iconic Dad’s Army template reminds us that this film is intended as an homage to its own history. At no time does it pretend to be anything that it is not. Despite the film lacking in some of the ingenuity that the television sitcom boasted, there is no need for “permission to panic” at this time. Though mediocre at points, the film does what it is required to do and is a fair salute to its source material.