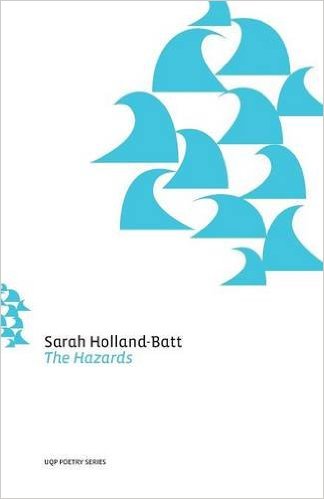 “For all flesh is as grass”. With this biblical epigraph from Brahm’s Ein deutsches Requiem, Sarah Holland-Batt declares what is at the heart of her most recent poetry collection: nature. Holland-Batt is an Australian poet whose first book of poetry Aria, published in 2008, won multiple awards, among them being the Judith Wright Prize. The Hazards is separated into four sections, each fronted by roman numerals; Holland-Batt’s poems belong completely in the sections she places them. The poet knows exactly where her works should live, and with which ones they belong: section I is a group of responses to various things and places; section II is specific to descriptions of animals; section III is closer to travel poetry; section IV mirrors the first. Many of her poems in this collection have appeared in The New Yorker, Poetry and Agenda and thus may seem like fragments brought together, scraps of life, dried leaves of thought she has collected over the years:

A decade late, I found a wrinkled block of newsprint
under the orange crucifix,
six men waist-deep in the Mekong
where the war’s end could never come.

The Hazard’s four sections are less like boxes of poetry, and more like leaves in a diary that follows Holland-Batt’s life a poet, changing and ageing in the process; they offer glimpses of a woman leaving rural life, the thoughts she has as she falls deeper into the cosmopolitan anxieties of urban life, noting also the hazards in both worlds.

Phonetics are vibrant and visceral in her poetry,

Heavy diphthongs drag these lines, slowing down and thickening the atmosphere inside “The Orchid House”. This sound is steady in the first section, where she is evoking a youthful reminiscence. “The Vulture”, however, gets its sound from plosives and the most unnerving fricative consonant, ‘s’.

A reptilian meanness in the face:
raw pink skin rolled on the skull.

As the first poem in the second section, “The Vulture” sets up its own section as a mini collection with descriptive poems of animals, all hazardous in their own ways. In this poem the reader can hear the “feline hiss” of the Vulture. Holland-Batt’s little words sound right; however, there is at times an over-confidence perhaps, particularly in the line “See the macaw somersault out into the sea”; here the alliteration feels forced. In much of her poetry, however, sounds are apt, well chosen and spaced, giving the line and its sound room to breathe.

Linked into her use of sound is the form she chooses for her poetry. There is an array of forms in this collection, each carefully chosen to ground the feel of the poem. In “Possum” there are two sentences, the second lasting an expansive 30 lines, which hurries a poem into a scurry. Furthermore, Holland-Batt bends certain grammatical codes, not pluralising or providing the article:

We do not know if the possum is a singular or a plural as it is not defined. This ambiguity points to an understanding of the poem as a conceptualisation of possums; we know only “of possum on the road”.

“Interbellum”, however, is nine stanzas of three lines each. Everything in this poem is still, mirrored in the calm clippings of words. This poem, as the title suggests, is about the anticipation of danger. In the brief stillness of peace and the coming of war,

cotton moths dogfight
to the death, to claim
their ration of light.

Phrases contemplative and quick are what holds this collection together. Holland-Batt nests haunting ideas inside her poetry, to be discovered accidentally like an old photo news clipping in an Orchid House. As she bites into microcosms of violence and villainy, and of life and loss, you are allowed brief glimpses into her scrapbook of life.