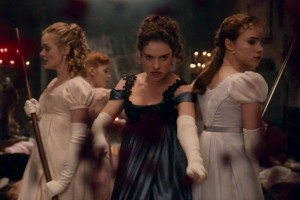 Jane Austen’s renowned 19th century novel received a rather unique twist in this adaptation of Seth Grahame-Smith’s book of the same name. Though the idea has great potential, its attempt to both please lovers of Austen and to create a chilling and scary atmosphere for lovers of horror will end up leaving most viewers unsatisfied by the end of the film.

The combination of the famous love story between Elizabeth Bennet and Fitzwilliam Darcy in a 19th century England that has grown accustomed to spending years receiving martial arts training to combat the zombie invasion is a very different take on the classic story. In a land where people are raised for battle and war from a young age, it is interesting that the country’s landed gentry still have a great deal of focus on marriage. The stiff upper lip attitude gives the whole movie a very British feel.

One of the best scenes in the movie occurs rather early on, when the ball the Bennet sisters are attending is besieged by zombies. The sisters proceed to slaughter a great number of them, pulling knives and swords from various improbable places to take down the zombie hoard. Indeed, many of the fight scenes in the movie involve the Bennet sisters, most of whom are unfortunately interchangeable. All these skills seem to do is provide yet another point of contention in the argument over Elizabeth’s need to get married, as it appears normal for women to swap martial arts for marital contentment.

Despite all the various action scenes that occur in the movie, the zombies feel almost like an afterthought. Though this reflects the novel, it does not satisfy the viewer. We are given a short narration at the start of the movie that explains the cause of the plague and that is all. Despite sharing a third of the title, the zombie plotline is largely underdeveloped and unconvincing.

The concept of Pride and Prejudice and Zombies is a good one, but in order to fit the zombie scenes into the one hour and forty-seven minute long time-scale, many vital scenes from the novel are cut. The storyline between Darcy and Elizabeth is so pared down it makes little sense, much of the slow reconciliation between Lizzie and Darcy being lost and making their eventual coupling seem jarring and unfounded. The complex, difficult relationships and characters that are portrayed in the novel are so integral that there is barely a scene from the original that can be cut out and still have the story make sense. Though Elizabeth and Darcy are often hailed as one of the most romantic fictional couples, Pride and Prejudice and Zombies reduces their relationship down to a handful of interactions that are mainly peppered with arguments and fights – one of which gets very physical – until they are miraculously married.

The true highlight of the movie is the incomparable Matt Smith as Mr Collins, the cousin and possible suitor of the Bennet sisters. He manages to make the obnoxious, self-important Mr Collins into a rather entertaining character. His annoying obliviousness to the goings on around him, which renders him funny in the original novel, paired with Smith’s ridiculous expressions and flailing limbs, makes for a very enjoyable character. He provides many of the humorous moments in the movie, providing some much needed light-hearted moments in between the various zombie massacres and complex relationships.

The concept for a mix of the austere, proper 19th century England and a zombie invasion is a fascinating one. However, the complex characters and relationships in Pride and Prejudice are such that the addition of other elements removes far too much from the original story to make this movie enjoyable – especially for Austen fans. Perhaps Pride and Prejudice and Zombies is one marriage that should never have taken place.