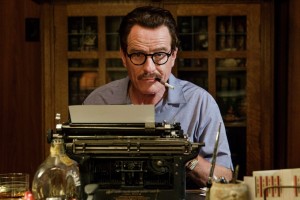 “Are you or have you ever been Trumbo?” ask the promotional posters for Jay Roach’s Trumbo, a delicate piece that explores the real events of the McCarthy Era at the height of the paranoia surrounding The Cold War and Russian/Communist influence upon American citizens. Bryan Cranston masterfully takes on the role of Dalton Trumbo, a highly-talented Hollywood screenwriter and a proud serving member of the Communist party in support of free speech during the events across this time when he, and many of his friends and associates, were blacklisted from creating or influencing films in any way, shape or form due to governmental fears of the film industry’s potential as a platform for Communist propaganda. Returning to the poster quotation, the gripping narrative shows the true struggle that Dalton Trumbo and his family faced as a result of his fierce pride in supporting the creative freedom he believed every human was entitled to.

If the sight of Bryan Cranston still instantly casts your mind back to his furiously passionate portrayal of Walter White in Breaking Bad, his portrayal of Dalton Trumbo only fuels that fire. When I say that it fuels the fire, I mean he empties a whole canister of gasoline on it and walks away glaring into the camera, casually tossing a lit match over his shoulder.

From intimidating court scenes to those that develop within the Trumbo household, Cranston embodies Dalton Trumbo in such a powerful manner that I found myself thinking “if this was a movie it would be astounding” and then swiftly recalling I am sat in a cinema. That’s how real it was; the tense narrative and use of distressed black and white footage mimic the look and feel of documentary footage, emphasising the frightening reality of the events on screen. The additional support from such talent as Diane Lane, Helen Mirren and a perfectly suited and hilarious John Goodman, Trumbo really becomes a sequence that creates a strong sense of emotional attachment for the main character.

An aspect that I can’t stress enough is how delicately and effectively the films sense of period, spanning from early 1940’s all the way into the 1970’s. The adaption of cast make-up and presentation along with the way in which the culture within the narrative develops is simply astounding. The progression of music trends and popularity on radio stations and at parties combined with the way fashion evolves on-screen really adds to this sense of realism that the film exudes. Never once did I find myself thinking a character looked ridiculous or not the age they were meant to be portraying, or a scene looked or felt out-dated or too far ahead of its time; it was executed so fluently I feel it definitely required appraisal.

I went along to the screening of Trumbo with a friend who was conscious I’d recently studied the McCarthy Era at university within a Film Studies module; I was interested to see how he would feel about Trumbo from a “blind” standpoint. I am more than pleased to report that he had a similarly gripping experience with the narrative and characters, saying that he was never once bored or uninterested at any one aspect of the film. Jay Roach’s direction really gets you supporting this cause through Dalton Trumbo, who faced such gargantuan adversity, friends like snakes turning to bite him and others like boulders beside him in every step; he becomes a saviour of sorts. A chain-smoking, typewriter pounding, bourbon sipping saviour that I couldn’t help but follow.