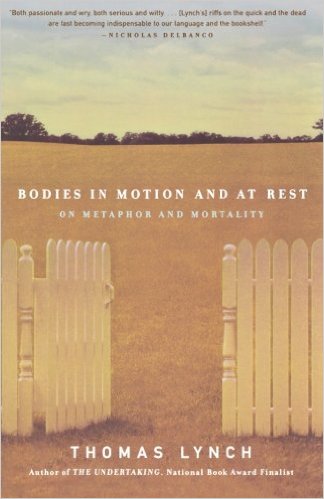 Thomas Lynch is an American award winning poet and writer. He won the American Book Award for his publication, Undertaking: Life Studies from the Dismal Trade, which was also short-listed for the National Book Award, and his essays and poems have appeared in a host of distinguished magazines and newspapers including Harper’s, The New Yorker, The Paris Review and the London Review of Books. He is also a funeral director in the business that belonged to his father before him, and where several of his own family are also currently employed. It is good to know these facts before delving into the collection of essays that comprise Bodies in Motion and at Rest: On Metaphor and Mortality; good to know but not imperative because all is revealed in this frank, honest, contentious and very entertaining collection of Lynch’s thoughts and reminiscences.

If you think that being a poet and a funeral director is an unlikely combination then you are not alone in your thoughts; Lynch explains that when he goes to Trade Conventions for the funeral industry he is singled out as being ‘unusual’ for his poetry prowess; people at poetry meetings are amused and bemused by his funeral industry connections. In this publication Lynch proves himself to be more than the mix of two apparently diverse interests – he is also a recovered alcoholic who has a son encumbered by same problem. The futility and irony of this situation is poignantly described in a way that demonstrates the beauty of Lynch’s writing; an example comes in the line “His [his son’s] thirst puts him utterly beyond my protection but never outside the loop of my love” The one denominator in all twenty of the disparate and often harrowing essays in this publication is the quality of the writing: that Lynch is a talented wordsmith is never in doubt.

Thomas Lynch is forthright in his views, and that comes across plainly in each of his essays, but he leaves room for consideration of another’s viewpoint and leaves questions open when he doesn’t have the answer. The many disparate topics of his essays include abortion, creationism, abuses of burial grounds by do-gooders, and the funeral trade itself. It is on the funeral, and the industry which surrounds it, that Lynch writes from a position of experience and certainty. He uses the term, ‘casket’, where the people in the United Kingdom would use ‘coffin’, and certainly the ubiquitous practice of embalming the dead is something which is used by exception in the UK, but other than that the situation he eloquently describes is common to most communities. In identifying the increasing problem posed by conglomerates acquiring independent firms in order to increase profitability through benefits of scale, Lynch sees that personal service, built by decades of experience (the average time in existence for independents in the USA is 58 years), will erode in companies where the profit to shareholders comes before “the care of the living and their dead”. His intensity of interest on this subject is mirrored in each and all of the included essays, and that makes Bodies in Motion and at Rest: On Metaphor and Mortality such an enduringly interesting read.

Lynch can, and has, traced his forebears in Ireland, and he was bequeathed a cottage there where he rests up once or twice a year. The poet in him is inspired by several better and lesser known poets, both living and dead, but his unabashedly favourite writer and main inspiration is William Butler Yeats. Knowing that might influence a reader of Lynch’s poetry, but when it comes to a book of essays it is not difficult to see an original style which is as informative as it is lyrical.