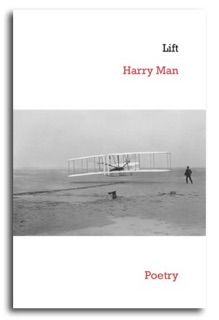 Deeply embedded in its time, Lift, Harry Man’s first poetry collection, offers insight into how growing up in the late 20th Century, amidst rapid technological advancement and ground-breaking scientific research (especially in the domain of space exploration), might have oriented and shaped one’s personal experience of the world. His poems, imbued with a communicative and childlike sense of excitement and wonder, are manifestations of a mind bubbling between a fascination for the cosmos, and the infinitely small and mundane.

Lift is an invitation to explore both the worlds of science fiction and of science fact; this makes the collection a rather novel poetic experience where time machines and rocket ships cohabit in the same mind-space. Far from being disorienting or intellectually intimidating, his merging of both fixed scientific truths and inexhaustible imagination reminds us of how scientific investigation and technological advancement, rather than offering definite answers, open the doors to even more thought-provoking questions concerning the cosmos. Man’s work is engaging and accessible, and his writing style is playful in the way he experiments with both form and words . Consider the neologism ,”telesue”, a so-titled poem which was awarded the 2013 PEN International Made up Words Competition. Seemingly a bit of a humanist, Man excels in mixing jargons from different fields, sometimes making references to mythology and religion in addition to physics and biology. In doing so, he keeps us on our toes and in a state of constant cerebral alertness as we attempt to match the flow of the different associations he manages to reconcile. Though the ideas and images combined don’t always make literal sense, they offer an impressionist depiction of the postmodern world, embedded in its own cultural aroma.

His poetic stance is mentioned fleetingly in “Object”, which particularly spoke to me. Akin to an interactive thought experiment, it mimics the process associated with the interpretation of an impressionist painting thus demonstrating the importance of subjectivity in interpreting art. Man’s choice of words replaces the delicate brush strokes on the canvas; we can observe this intention in the opening line: “Scattered, the words represent forms in their own right and are also significant in their cumulative effect.” He goes on:“No other viewer of this text either now, in the past, or in the future is imagining the same object”, thus foregrounding each reader’s own cognitive blend and capacity for sensory perception, memory and cultural associations, and how these elements are at play in their consumption of art.

Other aspects of Harry Man’s poetics which are striking are his capacity to make two seemingly incongruous worlds collide and his almost obsessive fascination with space and time.In his poem “Earth” ,“Bacteria and Eucaryota shared a link on your timeline”, makes a humorous and improbable association between a day-to-day life experience and a microscopic vision usually confined to a laboratory; one rarely ponders on the gravitational forces of the universe whilst scrolling down a Facebook news feed! Lab walls are broken down as he finds ways to interconnect the universe with contemporary topics and realities such as the expansion of social media. His attention to typographic effects on key words increases this sense of interconnectedness: “Humans like Life. Humans and Global Warming are now connected. This way of unexpectedly combining the mundane to the wondrous oddly reminds us that these two themes are part of the same human spectrum, emphasizing the diversity and bizarreness of human experience, and the fragility of our sense of place in the world.

Whilst reading his poems, there is an intense sense of being more aware that things are not as they seem. And that, even though I might be in my bed comfortably reading this collection of poems in apparent stillness, I am also on spaceship Earth, which is , without interruption, constantly orbiting the sun at the speed of 66,000 miles an hour.