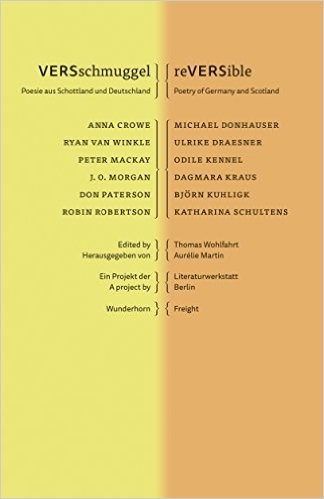 A creative project such as VERSschmuggel, of which this book is the offspring, is a remarkable thing.  Funded by Literaturwerkstatt Berlin for the 2014 Berlin Poetry Festival, four Scottish and two Scotland-based poets spent time in Berlin with six German counterparts.  With considerable assistance from translators, they paired to transform each other’s work into an English or German version of the original (Peter Mackay also worked in Gaelic). In the book, QR codes are available to scan each duo’s  sections so that readers can link to an audio file and hear a selection read out by the poet; this lends so much more to the poetry. The contributing poets range from Perthshire’s Robin Robertson to Hebridean Peter Mackay and Dundee’s own Don Paterson, as well as a number of German poets.

The content varies widely from the natural world, to love, loss, death and relationships and more.  In some cases, the clever way the poets and translators have applied syntactical adaptations means that the translations overshadow the originals.  At the other extreme there are some which, for me, don’t work at all.  And then there is everything in between, making generally interesting reading and listening.

The first poem is by American Ryan Van Winkle, “The Apartment”, German version, “Die Wohnung” by Björn Kuhligk.   Both pieces read well in simple yet powerful language, and the description of the accommodation awaiting the unknown narrators builds menace and tension, leaving significant foreboding.

We have one year together in a place that
is empty at dusk and feels like fog
inside and between us,
and Christ, tomorrow,
we will live here.

In most of the Van Winkle/ Kuhligk collaboration, there is a desire to remain consistent to the original which is not always the case elsewhere.  The German versions in particular are constructed with imagination and verve; in “Die Wohnung”, the word “fog” is not simply translated as the obvious “Nebel”, but instead “Grauschleier” meaning “greyness” or “veil”, which sits so much better in the original’s poetic context..  Earlier, “City Hall” translates as  “Verwaltung” – “management” or “authorities” –  to fulfil the untranslatable task.  For me, the German poem works so well that it exceeds the ambition of the original.

Kuhligk has a much more pleasant delivery than his American counterpart – a natural musicality; Van Winkle presents with an irritating forced-sounding rhythm – disappointing, much like the translation of Kuhligk’s “Das Gedicht geth durch einen Körper und grüsst nicht mal”.  This poem works in German because each first line starts with the subordinating conjunction “wenn”, which always sends the verb to the end of the clause, but also bringing it to the front of the subsequent clause, thus:

“Wenn man etwas tun möchte, möchte man etwas tun”: When you want to do something, you want to do something.  That wasn’t in the English counterpart poem at all because the phrase was completely missed. It might have been that they deliberately didn’t translate it (though one is not sure why), but repeating the same phrase in English when your word order remains unaltered just doesn’t have the same effect, and seems a rather pointless exercise.

I have so much more to say about this collection than is possible here.  Accordingly, a speedy summing up: “Im Hof der Tschatschenden Frisöre” by Odile Kennel is one of the most beautiful and imaginative German poems I have ever read, but the translation of the same author’s work into “Bestial Question” (Anna Crowe) borrows shamelessly from Dr Seuss, and adds so much content that it becomes a different poem.  J O Morgan’s untitled pieces about goats and check-out time are witty and tragic in equal measure, and his delivery is a joy.

For a book which claims in its introduction that “The result is translations of the highest quality, aftersongs” (aftersongs?  Eh?), they might have chosen to apply the same rigour in the English translation of that very Introduction, and also of all the poets’ essays and biographies.  These are nearly all written in a clunky, literal English which would have native speakers squirming in their seats at the German Society Stammtisch.  I could quote examples, but I’ve run out of words.

Some of the pieces in VERSchmuggel are breathtaking in their ambition and beauty, and others are interesting in their originality.  The pieces which mar the whole with an excessive need to give words a new or nonsense translation at all costs are those probably best forgotten.  The rest of the collection is so worthy of remembering.