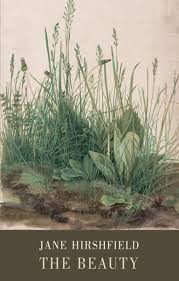 Jane Hirshfield is an award-winning American poet, born in 1953 in New York. Since graduating from Princeton University in 1973, she has lived in California, where she has lectured at the University of California, Berkeley. In addition to her previously published poetry collections, five of which were awarded prizes, she is an essayist and editor of several volumes of women’s poetry, concentrating particularly on the poets of Ancient Japan. She was elected a Chancellor of the Academy of American Poets in 2012. Bloodaxe published her first UK collection in 2005 and have followed it up with three other collections, The Beauty being the most recent.

This new collection comprises mainly short, free-verse poems; indeed there are very few poems of over 35 lines. Her style is spare and often haiku-like in its stillness and seeing anew, which is not to say that these poems are always patterned in the typical seventeen syllable interpretation of that form.

The Beauty opens with a single poem, “Fado”, which is separated into its own “chapter”. Fado is the particular musical genre of Portugal, which mixes longing, fatefulness and melancholia. The poem shares these moods, contrasting the presence of objects conjured by a magician with their seeming, previous absence. The lines move to a specific location in Portugal, where

a woman in a wheelchair
is singing a fado
that puts every life in the room
on one pan of a scale,
itself on the other,
and the copper bowls balance.

In this, the poet seems to allude to Zen Buddhist philosophies or perhaps Heidegger’s ideas of “being-in-the-world”. Another poem, “A Chair in Snow” exemplifies this dasein approach:

and yet a chair in snow is always sad

to hold
a soul its quick and few bendable
hours

The lack of punctuation presents no problem to a calm reader. Hirshfield allows an inner sense of rhythm to break lines and group phrases in an uncontrived manner, enabling the reader to follow the poems’ structures almost unconsciously. This is a poetry of ideas, of becoming. Its language may be simple but this is not to deny the collection’s power or profundity.

There is a gentle irony present elsewhere. In “My Skeleton”, Hirschfield undertakes a phenomenological investigation of physical embodiment:

When I danced,
You danced.
When you broke,
I.

And so it was lying down,
Walking,
Climbing the tiring stairs.
Your jaws. My bread.

Someday you,
What is left of you,
Will be flensed of this marriage.

There are haiku in the collection too, gathered under the heading, “Twelve Pebbles”. Again, these seem to involve an active exploration of the physicality of being, but Hirshfield is able to transform this apparent materiality into the holistic experience of being alive. In “A Hand Holds One Power”, she writes,

A hand holds one power,
Whose exercise requires the hand be empty.

“As a Hammer Speaks to a Nail”, appears to draw on Deleuzean difference and repetition. The poem uses repetition to add weight to its objectives, elaborating with rhyme its exhortation to the reader to

fail boldly,
fail with conviction,
as a hammer speaks to a nail,
or a lamp left on in daylight.

While I’m not quite sure of the sentiment here, it sounds a bit like advice to a politician this is a collection that rewards re-reading. Many of the poems have layered meanings that reveal themselves gradually and can certainly bear concentrated study.