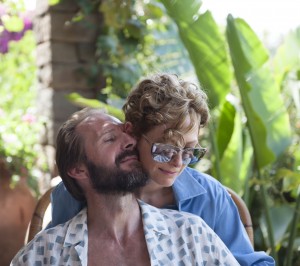 I have an admission to make: I went to see A Bigger Splash entirely for one of my favourite actors, Tilda Swinton. In the Swinton watching review, this is a very interesting and entertaining film. Swinton plays an aging rock star who has temporarily lost her voice, meaning most of her performance is either silent or emphatically whispered. Both aspects work brilliantly, as her body and facial expressions are a joy, reminiscent of the greats of silent cinema, and emotional beats of the character land with particular power when she strains to speak. It is a fascinating performance, and in many other actors’ careers it would be a boundary pushing best. It’s just a shame about the film surrounding her.

The film deals with a plot of adultery, aging, accepting a normal life, jealousy, murder, immigration, music, celebrity, intrigue and much more. That may sound messy and mismatched, and unfortunately it is. There are simply too many plot threads and thematic ideas. A particularly awkward element to explain this is the immigration aspect. The film attempts to put the petty lives of the main characters into relief by contrasting them with a group of refugees attempting to enter the country. This comprises about three scenes that last around ten minutes in a two hour film, making it feel like an awkward tacked on extra. It also parallels the drowning of a lead character with some of the refugees having drowned, and due to the lack of time spent building up to this, it is difficult to tell if the filmmakers mean to condemn the protagonists for being so self-absorbed, or if they genuinely think that adulterous jealousy is comparable to fleeing a country under oppression. It seems to be the former, but the film spends so little time with the idea that becomes very difficult to tell what it is trying to say. This isn’t a case of artistic ambiguity, however; it is more that the film has so many ideas at play that none of them ever develop into anything concrete or engaging.

This is also the case for the film’s visual style. There are many interesting techniques on display, not limited to point of view shots equating the audience to the mind of the characters, snap zooms, hand held camera work and landscape admiration a la tourist advertisement. Again, as with the ideas the film dabbles with, these are interesting in their own right, but none of them fit together. The film has no consistent style even within scenes. It feels as though the director watched an enormous amount of French New Wave and 1960-70s Italian art films, chose his favourite techniques and then decided to place all of them into A Bigger Splash, without thinking about consistency or whether they were appropriate for the particular moment.

None of these issues are enough to sink the film however. Having too much going on is a very forgivable crime, for while it makes for a fragmented end product, there’s always something interesting going on. No, what sinks the film is Ralph Fiennes and Dakota Johnson. Fiennes and Johnson play father and daughter, who are intended to be provocative, fun-loving free spirits who shake up the calm world in which Swinton’s Marianne Lane lives. Instead of this however, they’re incredibly irritating and make the film nigh-on impossible to watch as they ham across the screen chewing every piece of scenery that isn’t fixed down. The characters are meant to be troubled and annoying at points, but the actors play this up to the extent that any scene with them is eye scratchingly frustrating.

In the end then, this destroys an interesting film. Thinking back on it, the film had a number of themes and plot threads I wanted to engage with and a captivating central performance. None of this mattered however, when two actors made me constantly want to leave the cinema.