The DCA is a wonderfully apt setting for their latest exhibition, Grey Gardens: one of many celebratory events for the national Festival of Architecture. And it’s no coincidence that the arts centre has itself been recognised as one of the top contemporary Scottish buildings in the last century: it’s light and airy space houses the collection of architectural investigations that hold a similar, simplistic motif.

The name “Grey Gardens” is also fitting, as a key characteristic of the exhibition is concrete- one of the most accessible materials of the 60’s- integrated into varied and rich landscapes. Although it is not commonly regarded as the most attractive architectural material known to mankind (the Brutalist movement, that utilized tonnes of the grey matter, was not named so for its delicateness!) the exhibition sheds light -quite literally- on the possibilities concrete holds, and the surprisingly delicate way that it intertwines with the natural world around it.

The exhibition space is vast and boasts an exhaustive selection of displays including photography, sculpture, models and film. Having been lucky enough to visit on a bright Sunday afternoon, the rays of sunshine coming through the skylights bounced of the three-dimensional work beautifully- highlighting the benefits of minimalist architectural space, as it acts as a canvas for nature’s intervention.

There is a real warmth to the framed 60’s photography of David Harding’s architectural interventions in Glenrothes, one of Scotland’s new towns designed to house miners after the Second World War.  An ECA graduate, Harding’s ambition to create concrete interventions within the town is suitably unpretentious, with a nod towards the town’s population of draughtsmen, celebrating their often overlooked craft. This helps form a culture in a young town with little history: a feat that art and architecture can evidently achieve. 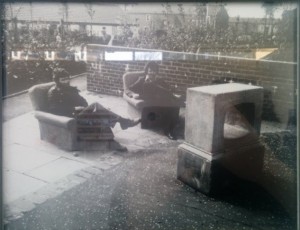 A documentary plays in the far corner on the eccentric artist-cum-architect Edward James. Working in exotic climates in Mexico, James’ humour and love for nature seems to translate to his ambitious buildings. With little regard for budget, they provide a stark contrast to the markedly less-grandiose architecture of that time, with the rise in high-rise flats in Scottish towns. Despite this, the recurring thread of respectful interaction with the landscape can be seen here and throughout the exhibition: A second video installation from Smith/Stewart depicts an intriguingly unfortunate but beautiful house designed by Peter Womersley that teeters on the edge of expectations… and a cliff. Here we see an architect that allows his structure to be entirely vulnerable to the elements- and the potential of a storm bringing the building to its end perhaps emphasises the temporality of all things, manmade or otherwise.

Adjacent: the Cumbernauld town artist Brian Miller’s decorative concrete slab (originally attached to a building) hangs beside its cast- an acknowledgement of the process and man-made elements that characterise architecture.

Focal points of the collection include Martin Boyce’s response to light’s role in framing lived environments as we peer out of windows: a sculptural wall hanging with metal letter fixtures that spell out “Against the Sky” is highlighted by daylight, and casts increasingly morose shadows as the sun sets.

The gallery layout is meticulously considered by the curators, with layouts that grant each piece of archived material with the space it deserves. The artistic responses alongside the architectural models reinvigorate the topic for a layman like myself, and emphasise the dialogical process and teamwork within this sector. This might have been further improved with less ambiguous labels of the work, as although the information and artist’s names were displayed further away (presumably so as to not interfere with the work) it was not entirely clear which labels correspond to which piece.

Grey Gardens brings to light a refreshing approach of architecture- showing rich examples of structures that collaborate with the surrounding land, rather than imposing on the striking Scottish backdrops. A memorable exhibition that highlights the creativity in the practical foundations of architecture (pun intended).