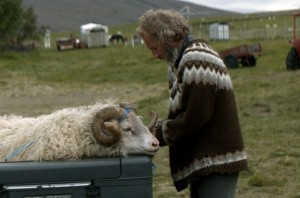 Rams is the story of two stubborn brothers who must put aside their differences to protect their animals, creating an interesting dilemma for the viewer; we want to support the brothers’ decision to disobey the law but there are numerous conflicting factors warning us not to.

The film follows an ageing man on his journey to save his sheep and ultimately everything he treasures in life. From this framework the story could go in many directions, yet the film before us creates its own story of isolation, madness and devotion to a cause. Rams features our main protagonist Gummi (Sigurure Sigurjjesson ), who is deeply dedicated to the upbringing, care and nurturing of his rams. Gummi’s entire livelihood depends on these sheep for his income and sanity, and therefore he faces a conflict when a disease is rumoured to be in the valley they live in, threatening his livestock. It’s been 40 years since Gummi and his brother have spoken, but they must overcome these obstacles to succeed. They both want the same thing -for the sheep to survive, even if they have to go against the law, each other and common sense to save them.

It is interesting that we need an imposing threat or danger, in this case the severity of the punishment if he is caught, to make the viewer want to stand behind Gummi and see it through. Even more so in this case because he is willing to receive the punishment in order to save these helpless animals. The viewer is always more sympathetic when it is a helpless animal’s welfare that is at risk. Often when the law is obeyed we don’t really understand the thrill or dynamic like we do when it is disobeyed. Rams tries to constantly demonstrate this way of thinking, even if at times we struggle to empathise with the lead character.

The man’s feelings of whether he should make the right choice or the easy choice highlight the raw elements of this film. The ingredients of it sound fairly bland on paper, but the emotion and humanity portrayed in the piece also make it moving. With any great film, if it gives the viewer a new or interesting insight into the life of another there is value in it. Rams does this in spades; the work is visually impressive, the acting honest and the environment essential to our understanding of the story.

The score shows us an isolated and exposed Iceland, causing us to feel closer to the characters as the single musical voice reflects so much more than the actors can verbalise, a lone accordion score leading us through the plains.

Gummi is a man of simple taste, himself stoic and hardened through years in the same position. His stubbornness and unwilling nature to understand the rationale of the authority who are advising him make for a tense and emotional plot. This allows the viewer to understand and appreciate why he makes these decisions. Featuring an almost unintentional dark humour which occasionally threatens to push the film into the realm of comedy, the films serious tone is periodically softened.

The bond created between man and his animals is unique. The well-known saying should go “sheep, not dog is man’s best friend.” The final scene is ambiguous in its dialogue, leaving the viewer with many questions about the decisions we make every day. At its core it challenges why we do things that we love, being extremely devoted to a cause and how this can come in the way of the people we love.