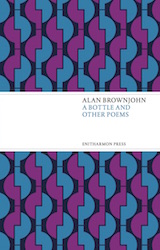 In his latest collection, seasoned poet and scrupulous “life critic” Alan Brownjohn writes candidly of modern life and the human experience. His penchant for the trivialities of la vie quotidienne manifests through an acutely realist and, at times, satirical lens. These thirty nine poems might be said to emulate the values of European cinema’s Neorealist movement, exposing as they do the universal characteristics of humankind through an observation of the common and mundane. Brownjohn addresses feelings of isolation, boredom, disappointment and frustration, in a manner that is so very intelligible, his words seem to transpose themselves to the experiences of the individual reader.

Brownjohn’s concern with the “minutiae of human behaviour” is evident in his attention towards commonly identifiable details. In “One of Myself”, he observes the process of having one’s picture taken by a stranger:

No, because his expertise
Was complimented, like mine in other places
When asked to snap a variety of faces
For their families, friends or posterity, or sometimes only
Themselves, to gaze at if they were lonely [.]

By taking this picture, the “stranger” at once becomes privy to, and responsible for, capturing an intimate moment. Brownjohn’s meditative tone, enhanced through his use of enjambment, allows readers to place themselves seamlessly into this familiar exchange, but from a new perspective. This is Brownjohn’s magic: he is able to reacquaint readers with aspects of themselves under a more poignant lens. Such is evident in “Musician”, where he describes the “ancient man” who:

Wound up to play for three minutes, the
Turned over for a second screeched melody,
The needle changed from a tiny box of the same.

In this tribute to Jim Burns, Brownjohn glorifies the lonely record operator to the level of musician, acknowledging thus the universal effect of music, where those who bring and play music to people are indeed musicians in every sense of the word.

The poet does not shy away from poking fun at our slightly embarrassing, yet endearing expressions of humanness. In “A Table” he makes a humorous observation of what is potentially one of the most reviled human interactions: small talk.

I have seen where the hands are going,
from etiquette, courtesy or nerves,
or just small things to do, while all,
our death colloquy goes on[.]

Sitting at a transparent table, the poet observes the truth behind gestures. The “small things” reveal the veritable transparency of forced conversations, again a tune familiar to many.

Brownjohn  also comments upon world issues such as corruption; in “What the Music’s for”, he adopts “music” as a metaphor for the perpetual lies circulated throughout the world, perhaps by institutions such as the media and the government:

The music’s for drowning the other music.
[…]
We believe in the music, it’s all about moving on
From anything kind and familiar [….]

In essence, these lies are told to “drown out” the sound of our reality. Similarly, in “The Competitive Product”, the effect of commercial advertising is put unequivocally into perspective:

the truth in small print with the plain word Death.
[…]
could give me wonderful enrichment or consolation
and even left me feeling I wasn’t bound
to take this product seriously at all[.]

Brownjohn’s involvement with the British Humanist Association speaks to his concern for our wellbeing. He expresses the very real threat the capitalist world poses to our perception of freedom and ability to make so-called “informed” choices.

This collection is Brownjohn’s message in “a bottle”. He sends it with “a mission” to raise the human consciousness.  Elevating the complexity of the human experience, he pays tribute to everyday men and women. Indeed, it is their narratives, their trivialities, which inspire and give meaning to his writing.