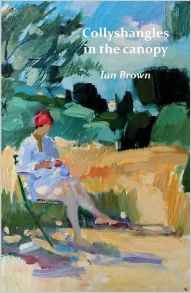 “This book begins and is made of gifts” writes Alan Riach in the introduction to Ian Brown’s new collection of poetry – a sentence that in it own curious syntactical imbalance strikes exactly the note of spontaneity and uncertainty that dances through every page of “Collyshangles in the canopy”. For is it that the book begins with, and is made of gifts?, or is the sentence straight away taking off into time passing, ignoring the need for any old Oxford comma in its exuberant insistence to get on, to get past, to go forwards. The latter is clearly the case. “What comes from far past and happens every day, in encounters with people, poems, works of art, in friendships and families are gifts that make our lives what they are.”

That kind of upended uncertainty that is quickly righted, a rush into something that feels not entirely thought through – the outcome of which could be… Anything! – is the experience precisely of this book, a series of reflections upon life and loss, history and place, that slip and slide and insinuate themselves into our thoughts, hovering there like memories of conversations, scraps of monologue, various things people may have said, or might have been: “She looked like one I’d known like a daughter” in “Euston Underground, 12.20, 5 September 2011”; “ ‘Do you need help?’ I called” in “Walking on the edge of abysses”, “I’m not sure,’ he replied,/…I think I may have broken my neck./Yes/That is what I have done.”

Ian Brown is a playwright, and part of the immediacy of lines like these, the spontaneous mood of the here and now, comes from the atmosphere of dramatic presentation – volatile, dramatic, with no sense of fixed outcome; we inhabit only the moment of the words that are being spoken now. “I think that never again in my life will I walk on water/From the Lake Hotel to the Inchmahone pier” is the opening of the coolly elegiac “Lake of Monteith Frozen”.

This is poetry of ordinary speech, then, of enactment. In one of its reviews, Stewart Conn, another poet who, like Brown, takes pleasure in the everyday, wrote of the “sustained wonder” of this collection – but surely the wonder is the wonder of each different lit-up moment, the sound of the second to second, with all the change that each second brings? “For my son at five months” proceeds in a set pattern of looking and recording only, at the last moment, to overturn scenario with gesture: “You ring your bell/With a knowing hand.” Swoosh! One can almost feel the curtain coming down – meditation upon the infant turned into a performance by him and then a finale: single son morphing into jester into everyman, all played out on the stage before us in one short poem.

A glance down the publications list confirms this playwright’s craft: there are “The Antigone Poems”, “Songs from Carnegie’”and a host of others taken from documentaries, radio, dramatic presentations and performances – all indicating a poetry that jumps and moves before us, that’s not going to sit still.

The stillness is in the making, of course. Poets know what it is to wait for time to pass, for memory to be embedded into reflection, reflection engraved in words. Jim Stewart, here at Dundee, talks of some experiences and thoughts taking thirty years or more “to find their way into poems’. When Rilke met Rodin for the first time, and looked around his garden and studio and house all full of sculpture and carvings that spanned his long working life, he too wondered at the time it takes to make things. “Do nothing but work” Rodin told the poet. “And you must have patience.” As Ian Brown’s poems show us, the expression of that patience can be a kind of exuberance – that sounds like elegy too.