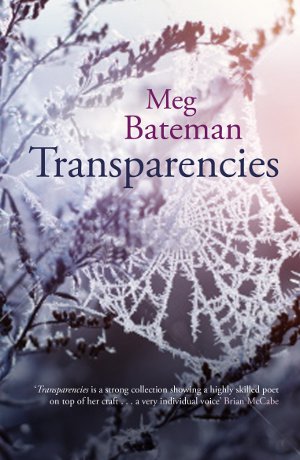 Should you wish to be transported into a fairytale world of Nordic myth then Transparencies by Meg Bateman may be just your thing. There are moments when one receives an antidote, often in an art form, which clears your mental fog. In this case it comes in the guise of poetry.

Meg Bateman has a considerable background in the study of Celtic writing from her undergraduate days at Aberdeen University; she also has a PhD in Medieval poetry. Both these aspects are present in the language, content and etymology of Transparencies.  She immerses the reader in Scots language and landscape with some poems written fully in Gaelic. Location is essential to her poetry which takes in the breadth of the Highlands from the wilds of Lewis to the comparatively urban concerns of Inverness. (Inverness is usually considered the capital of the Highlands and Lewis is obviously part of the Highlands and Islands). Indeed, it is quite a landscape, The beautiful imagery of these places is tied strongly to nature and to their sometimes extreme weather: “Monet should have seen this strangely tinted snow,/ bunched on black twigs against a milky sky.”

Her book makes the perfect companion if you’re the kind of person who likes to immerse yourself into a bit of gentle poetry. A neat minimalism characterises this collection, an approach which even comes across in the book’s pocket size tactility. The poetry, presented in carefully divided sections, is pleasing to the eye and not difficult to digest on some level at least. The Scottish scenery contains an undercurrent of the influences of Japanese poetry, which is curiously well-matched in its austerity. Indeed, the Zen layout of a haiku is lurking just beneath her approach with proportionately sectioned verses:

You took my picture from outside the house
as I read by the window
like a Japanese lady,
it is you who are Japanese, not me,
your Japanese eye that caught me in that frame.

Her choice to include a portion of Japanese subject matter is indeed a significant clue as to where the poet’s inspiration lies. By capturing a collection of moments in small snapshots, the poet builds a series of evocative, focused images which bind to create a greater whole.

Bateman’s language is deceptively skilful, rich with assonance, flowing comfortably when read. She manages a coaxing softness which is especially effective in her use of sibilance and gentle free-form verse:

I startle at the sockets in a gleaming skull,
at a heron’s harsh cry; try not to let
bog suck and swallow me…

There is an underlying nothingness essential to echoing the barren atmosphere that she conveys.  The isolation running throughout is tied strongly to the yearning, an egoless longing, which is at the heart of Transparencies.

Bateman’s succinct titles work hard for her poems. Consider “Ice”, “Chanter”, “Allegory”, and “Aubade”. There are poems, redolent with a strong sensory output, particularly “Scent” and “Indian Nights”, the latter providing rich and overwhelming meshing of the senses, “our opium curling with kerosene and cow dung into dark mist”. The heavy aestheticism dies down in the last few sections of Transparencies as a more analytical approach is revealed.

While I enjoy her vivid imagery, it is also intriguing to discover where else Bateman’s talents lie. An “A to Z of Greek Etymologies” is, however, too formulaic and rather too well-organised for my taste (despite the powerful language) and whilst I appreciate her interesting hybrid of poetics and analysis, the effect captivated me less. If Bateman’s best pieces are perhaps not always the work which she has been commissioned to write, some of these small wonders (published previously in The Herald) are delightfully coy. There is, in Bateman, a particular talent for capturing a snapshot of time just as one might capture a moment through a photograph. It is through our own experiences that we know we are alive, and Bateman’s poems are vivacious indeed.