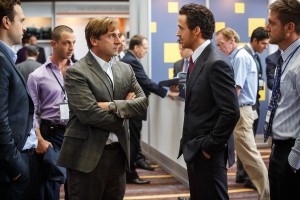 The 2007-2008 financial crisis stands alongside 9/11 as one of the most impactful events of the last decade. But, while the after effects of the latter were subsequently made obvious to the public by a deluge of media analysis and the spectacle of two foreign wars, the financial crisis remains largely unanalysed and un-commemorated. Despite the unimaginable worldwide economic hardship and misery that resulted from the collapse of the US housing bubble, the greatest financial meltdown since the Great Depression is an enigma to the average cinema-goer. Vast, impersonal and unimaginably complicated, it stands historically as a kind of inevitable natural disaster rather than a cautionary tale with human actors and motivations.

The Big Short, then, is the recent attempt of director and co-writer Adam McKay to reframe the financial crisis into more understandable, and ultimately more human terms. Based on the 2010 novel of the same name, it centres on the actions of various traders around the period of the economic crash. While their motivations and abilities vary, they are united in their shared prediction of the housing market’s impending crash, and their subsequent aim to “short” the US housing market, betting on its eventual failure in the hopes of a spectacular financial payoff.

The Big Short’s ensemble cast serves as a vehicle for both an audience-friendly exposition of the mechanisms behind the crisis and an exploration of the larger moral dilemmas that underlay the actions of traders and banks in the run-up to it. As neurologist-turned-investor, Michael Burry (Christian Bale), discovers the weaknesses in the housing market that doom it to failure, technical concepts such as “collateralised debt obligation”, “credit default swap” and “subprime debt” unobtrusively settle themselves into the vocabulary of the film. Meanwhile, the various other investors who are lucky enough to catch wind of Burry’s prediction are forced to explore the ethical dark side of the financial sector in order to confirm its veracity.

The strength of the writing in the Big Short lies primarily in its ability to explore this dark side while linking its subsequent impacts to wider society. When Mark Baum (Steven Carrel) and his team of traders investigate suburban developments propped up by subprime mortgages, they find communities plagued by financial insecurity and predatory lending – and real, primarily poor, working-class people losing out as a result. And if homelessness and insecurity is the reality of predatory lending practices at the bottom of the pile, what they find at the top is unsurprising: corruption, greed, stupidity, and enormous amounts of wealth. Traders Charlie Geller (John Magaro) and Jamie Shipley (Finn Wittrock), backed by veteran investor Ben Rickert (Brad Pitt), develop this theme further as they attempt to get their small-fry hedge fund in on the action. As the housing market begins to crash, their excitement to profit from it is tempered by the realisation that the bubble’s bursting will result in unemployment and even death for those most vulnerable to the financial shockwave.

As the curtain falls on The Big Short, we are given a glimpse into the aftermath of the collapse of the housing market: the fall of the big banks and the subsequent government bailouts, the insignificant judicial and regulatory response. Given the misery the crisis caused, and the overwhelming hubris of its perpetrators, it would be hard for any viewer to leave the cinema without feeling at least a little angry. Any film which is able to generate an emotional response around an event that has been so successfully minimised, misunderstood and forgotten should rightly be considered a success.