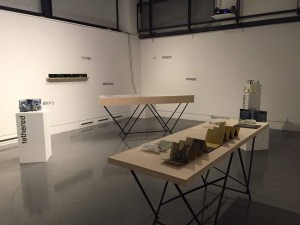 Working with the theme of montage, the curators make the case that the artist’s imagination lies “on the edge between reality and fantasy, where logic is irrelevant and nonsense can be oddly rational”. This assertion helps solidify the link between the state of dreaming and the form which the content of this exhibition takes: the book. In its traditional sense, the book is recognised within two genres, fiction and non-fiction; it encompasses both the real and imagined within its physical framework, holding together lines of human thought and, in a sense, mimicking or enacting our dreams.

The structure of the exhibition is a journey through states: from awake, into the dream and back to awareness. The books are laid out in a circular form so that whichever route you choose to take in your journey around the space, you will always end up back at the same point. However, on the walls there are words which confuse this passage, weaving their own path of consciousness:

These words may hint toward a sensible order or narrative, but at the same time act to fracture and disturb the flow, leading us to question where the lines of reality and clarity blur as they do when entering into a dream. With this we are encouraged to travel freely outwith any specified conventions of the gallery.

Some of the books on show included Calum Colvin’s, The Magic Box (2014) Edition 100/100, a collection of text and images viewable through 3D glasses. In close proximity to this was Graham Fagan’s Cabbages in an Orchard (2014) Edition 600. On a shelf behind these sits a series of handmade books by Seekers of Lice, small and unconventional in form.. Within one of the books, entitled Decimals of Feelings (2008), I discovered a statement raising yet another consideration for the theme of the montage “Is an archive the opposite of a constellation?” 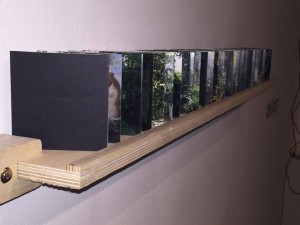 Along the length of an adjacent shelf, is Illiers Combray (2004), an edition of 500 by Helen Douglas and Zoe Irvine. This double sided concertina book suggests the uncertain measurement of time within the imaginary, an idea paralleled with time within a dream also. The book consists of imagery collected from the town of Illiers on which Marcel Proust based the town of Combray in his own book In Search of Lost Time. The artists have created their own reflective narratives using recorded sounds and music which exists on two accompanying mini audio-CDs. Our experience, however, is limited to the visual, but this distortion of content fits with the desired curatorial vision: dreams are not straight-forward stories, but they too are folded and concealed and their sound sometimes muted.

Some of the books are held in a glass case, perhaps too delicate to handle. This actually proves to be very effective in demonstrating the complex nature of a dream which for some, is a window into the processes of the unconscious mind. However, one cannot move beyond the glass, limiting our understanding, perhaps to protect the most personal and intimate details of ourselves from being discovered.

a dream is a montage is a well considered composition of both content and form. When within the exhibition we are reminded that the dream is a space in which we are in isolation: it requires a quiet concentration and slow pace for contemplation and rest. We are even invited to share our isolation in a final book, sharing one of our own dreams and in fitting with the title and theme, contributing to the making of a new montage.