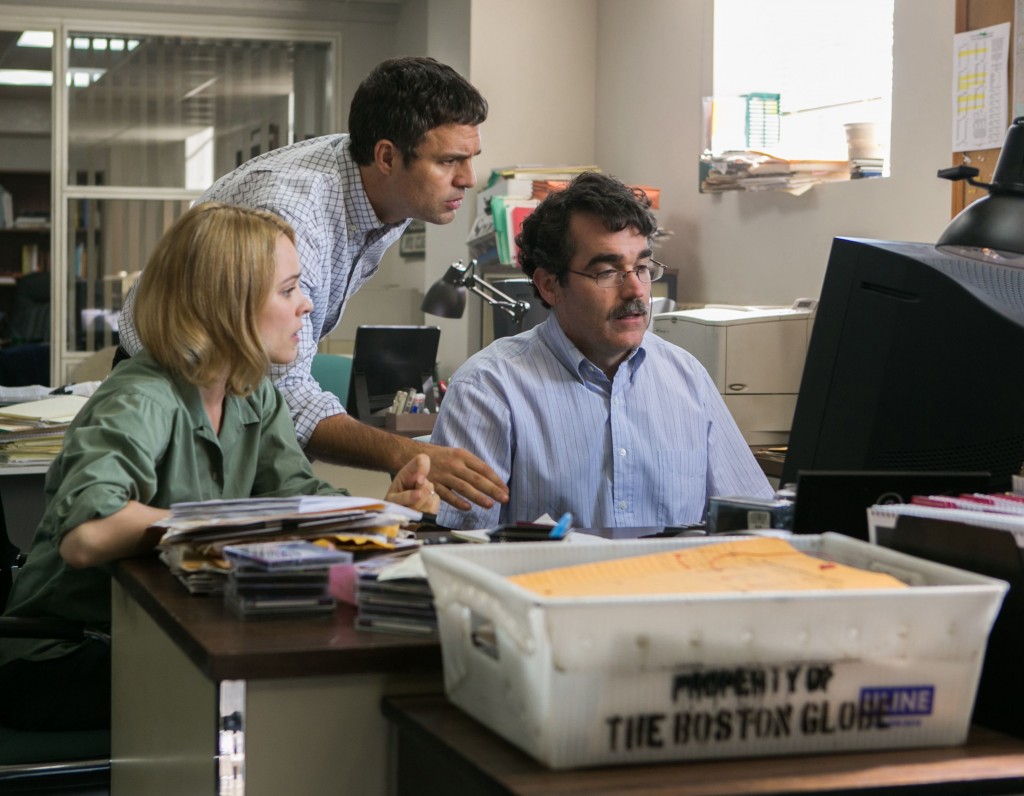 Spotlight‘s sensitive subject matter would be incredibly easy to mishandle. However, director Tom McCarthy has succeeded in providing a gripping yet grounded portrayal of the child abuse scandal The Boston Globe exposed in 2002. Devoid of visual frills, the film relies on an outstanding cast to carry it over the potential pitfalls. McCarthy and co-writer Josh Singer’s script anchors the action and has rightly been recognised in nominations for its honest and rounded approach.

The film strikes a fine balance between telling the story behind the story and the dramatisation of the increasingly difficult revelations as well as all those implicated and affected. The Spotlight team, headed by the gritty Walter Robinson (played by Michael Keaton), are the special unit who dedicate months of research to the more dangerous stories. The arrival of new editor Marty Baron – an unmarried reclusive Jew from Florida, quietly played by Liev Schreiber – arouses whispers of cuts which are quickly superseded by scepticism at  his decision to reopen an old story on a Priest’s paedophilia, which he sets Spotlight on. The repeated phrase “you want to sue the church?” reveals how far the city is entrenched in its faith. Indeed this city is proud of its heritage and unity. Wary of outsiders – especially those who don’t indulge in baseball – maps adorn the sets. Yet ironically it is the locals who struggle to see behind the institution so prolific in their city. It requires an outsider to spark the path to self-examination and why the story was not explored first time round.

The film adopts the cliché of male reporters rushing around slamming office paraphernalia and operating in to the small hours, yet establishes the sacrifices involved in the pursuit of such a story, the only victory they take being the short final scene of the office phones barraged by victims coming forward after the publishing. Most impressively and successful is the depiction of victims. Initially Phil Saviano is discredited as an unreliable source due to his erratic nature, but various interviews soon create a brutally honest retelling of the painful experiences and road to recovery those that “survive” undergo (the term a token of the damage inflicted).

Much of the anger and pain that is dug up in the course of the film is undirected. Mark Ruffalo rushes around as the star reporter Mike Rezendes with an increasingly desperate look on his face, yet no figures of the church are allowed to bear the brunt. Instead a short interview with a guilty priest reveals his disturbing justification and reconciliation with his actions, the phrase “who can say no to God” starkly exposing the position the clergy hold above vulnerable children. The issue is the system – which becomes increasingly clear is substantially more disturbing than “a few bad apples” and most crucially, supported by the wilfully blind eye of the public.

Amidst the exciting pursuit of sealed documents and reclusive sources, the slowly unfolding theme of the community and their complicity is the core of Spotlight – “If it takes a village to raise a child, it takes a village to abuse one” – while it becomes increasingly apparent that “everyone knows this story but us.” Scenes outside the brightly lit office space crudely feature a church spire in the skyline, emphasising the inescapable prominence of the church to the people and place.

Spotlight has quickly been associated with other classic journalism pictures like All the President’s Men (1976). By emulating the proven formula of its predecessors it plays safe, however, the journey to exposing the story and the balancing of all those implicated and affected is so well crafted – thanks to the original screenplay and ensemble cast – that it consumes your attention and builds a steady momentum. The understated and brief ending allows the end titles informing of the consequent discoveries sparked to truly resonate: four slides of places which have exposed similar mass cases of abuse by the church and the total of guilty Boston priests tripling leave you reeling.