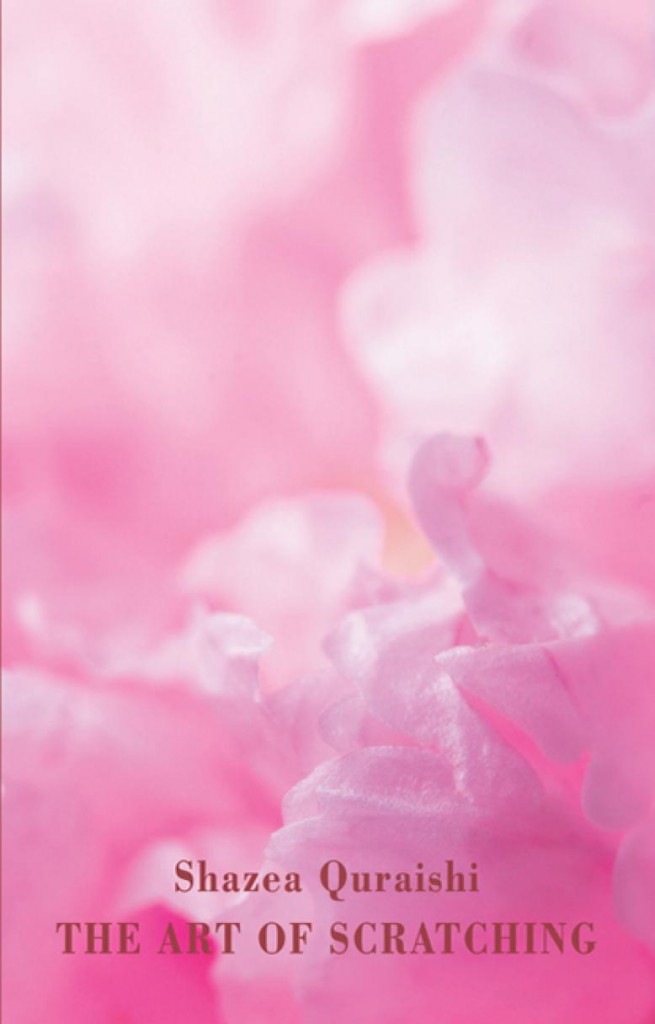 A luridly pink cover and a suggestive title first drew me to The Art of Scratching. Shazea Quraishi is a Pakistani-Canadian writer,and the second and middle sections of her new collection were published in her first pamphlet The Courtesans Reply (2012).  Having lived in Pakistan, Canada, Spain, and London, her influences are myriad. Of Skyros, she says, “I live near the place with the honey”, but the collection’s locations straddle “Mwanza, Malawi” and the “Story of a Small Block of Flats on Elephant and Castle”, and also ancient India in “The Courtesan’s Reply” sequence. Throughout these travels in time and place, there is an awareness her own identity and colour in reference to her brown skin: “I sing and cook, bare and brown, or in my purple dress”; “His strong brown feet shaped by his journey.”

Further, family figures prominently, especially that of a father figure, and most potently of the death of that dependable male figure. In “You May Have Heard of Me”, he carries the narrator on his back: “I lay along his back, wrapped in fur and heat, and while I slept, he ran.” Later, and hauntingly,  the narrator remarks,“I left home behind, an empty skin.”“Steps” also talks of a dead father. In “A Portrait”, a family is similarly imagined as a skin, carried on the husband’s back, while in “Cape town” and “Mwanza Malawi” children dream of their mother dying.

There are struggles with gender, and also the exploration of sexuality. The poem, “The Years”, is separated into eleven sections of prose poetry headed with the numbers 10-20 representing years in the poet’s life in a diary-like sharing. At 10: “I pray to God to change me to a boy so I can climb trees and get my clothes dirty.”At 14:“If you didn’t hang around so much with Rajini Malhorta, most people wouldn’t know you’re a Paki.”At 16: “Walking one morning to babysit, a motorcycle passes me on the dirt road. I hear it slow and then a man is in front of me unzipping his jeans. I run and then I cry.”

Quraishi’s ability to write of pain and emotion is not solely confessional. Consider “Madhavesana” , where a courtesan allows a man the use of her body but yearns internally, with some hope, for something else. Even in that bleakness, she finds humour, albeit black: “How is a courtesan to choose?”

Quraishi writes refreshingly and accessibly in many forms, from prose poems, through traditional stanzaic verse to concrete poems. The light and dark (and their sequencing) in “Story of a Small Block of Flats on Elephant and Castle” represent windows of flats at the different times of day over two months; the changes suggest endless possibilities for stories, explanations for different patterns and sequences of light and darkness. This was one of my favourite poems from the collection.

Here is a list of men to be avoided:
Those with tuberculosis,
With worms in their excrement,
With bad breath,
In love with their wife [.]

The poem “Sondasi” is one where one courtesan describes her love and lust for another courtesan and how she seeks signs of the other woman on men they with whom they both sleep:

Her love note to me.

This is very much its own poem, but the reader may note shades of a more famous Carol Ann Duffy’s  poem, ‘Warming Her Pearls’ perhaps? In the final poem of The Courtesans Reply, “Epilogue: in which we explain a few things”, the poet references her title, with all its layered meanings: “Tell more of the art of scratching”. Shazea Quraishi’s journey is an encompassing and diverse one; it is a privilege to share it.