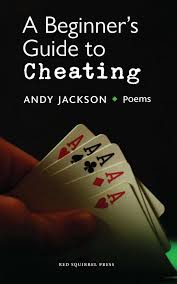 Not for Andy Jackson the esoteric or the pastoral lark ascending, it is realism that is essential to his work. Jackson has been published in a wide range of magazines and periodicals and had his first collection, The Assassination Museum, published in 2010, also by Red Squirrel Press.

In this his second collection, Jackson takes his inspiration from varied and sometimes unlikely sources. He gives us a series of unusual characterful portraits, from a finger-print expert to a dentist, a code-breaker to a police suspect. All are brought to life through strong images and narratives. As the Medical Librarian at Dundee University, Jackson also makes use of his scientific knowledge in a number of the poems, together with cultural references with which many will connect. His characters convey various ways of cheating: cheating justice, themselves, death or cheating others through lies or disguise.

Jackson paints from a large palette but, like any artist, he reins himself in for the sake of the final creation. For example, consider the first stanza of “Caution”, in which he quotes the standard police caution and then, with only slight deviations, plays with that small palette of words in the subsequent stanzas, strengthening the suspect’s need for silence to not only cheat, but to survive the judicial system:

You have the right to remain silent
and, when there is only silence,
you will remain.

Much of the collection also doubles as a comment on life, again in “Caution”: “Question anything you do not understand.”

From the titular poem, “A Beginner’s Guide to Cheating”, Jackson tells us how a lie can colour your whole life:

Beware your first deception. It is elegant
by nature and will write itself on everything
you touch, a retrovirus you cannot erase.

In the last stanza he outlines what will happen if you are caught:

remember: if they catch
you out, they might as well have caught you
going through the pockets of the dead.

In “The Unification Church of Dr Robert Moog”, the poet offers the sine wave as a metaphor for life and the illusion of freedom:

this also leads me to believe he has at least a passing interest in sound synthesis. One poem I returned to time and again was “Zealocracy”. In this Jackson has used his word skills to depict how modern life is being dictated and controlled by the internet “flashmobs”. In addition he has given us fantastic neologisms which fit perfectly; they appear not only in the title but throughout the poem: “blamestorming”, “middle-class moralysis”, “nonformation”, “antifacts”, and my own favourite, “Darwikian age”:

Welcome to the Darwikian age;
government by crowd-sourcing, the bloc
that can’t be stopped, genned up and ready to rock.

“Crossroads” also impressed. With a nod to Robert Johnson, the great blues singer who was said to have made a deal with the Devil, Jackson makes further comment on how we make our own deals with our own devils. This poem contains my favourite lines from the whole book:

The Devil has been round. He wants his due, but will
consolidate your loans in one affordable damnation.

Throughout this collection Jackson’s language is rich in narrative whilst also managing to remain accessible. Half-rhyme and internal rhyme dominate, but is often so subtle the strength of it is only revealed when reading the poems aloud. The work demonstrates wit, a healthy cynicism and perhaps a hint of sadness on the myriad of ways we cheat ourselves, each other and the world around us.

If you like your poetry down to earth and dealing with everyday aspects of life, then I recommend this collection.