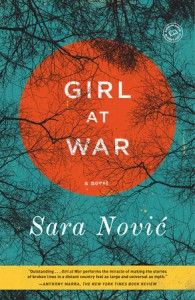 “Then using the dead as step-stools, I climbed out of the ground.”

The protagonist of Sara Nović’s debut novel Girl at War is the beautifully-drawn tomboy narrator, Ana, who would be six years older than Nović herself. Unquestionably, this book’s research has not all been done from a library seat. In a search for more than one identity in this continent-crossing story, Nović has surely lived significant experiences. As much as any human character in this narrative, the former Yugoslavia, and in particular Nović’s native Croatia, dominates. The title Through the Embers of Chaos (Dervla Murphy 2002), her book of that time and place is perhaps a fitting description here.

Girl at War is written in four distinct sections, which occupy two different times and places in the narrator’s life. Opening in 1991 in Zagreb, the first section sees ten year-old Ana living the war as perhaps ten year-olds must. What makes those of us privileged to have been ten outwith a war zone recoil is the only known normality for Ana and her peers.  Becoming a good runner en route to air raid shelters or doing without water and power was simply manageable and usual. For Ana “The war in Zagreb began over a pack of cigarettes” when she first encountered the real danger of being of the “wrong” ethnicity. Nović captures this particular innocence and remarkable adaptability very sharply, and in this there are reminders of how Khaled Hosseini draws childhood experiences, particularly in The Kite Runner. Indeed there are many parallels with his writing of the Afghan situation. Both examine, very skillfully, the necessarily premature maturity of children raised in the face of conflict and the often (literarily) unspeakable effects on them of such trauma.

This is a much rawer and harder-edged novel than Téa Obreht’s The Tiger’s Wife, but like it, to a lesser  but still significant extent, it sews into the narrative the region’s considerable richness in folklore and family storytelling.  As Ana’s baby sister Rahela ails, the warmth of that family, with their needed but  caring duplicities in that extreme environment, sees them hurtle towards the book’s most shocking scene. Everything after hangs on this, closing that carefully-named first section, “They Both Fell”.

Section II, Somnambulist, sees Ana at College in New York, and giving witness to the UN. If she is outwardly composed in her new situation, it is hardly surprising that on exiting the hall she “vomited in a potted plant.” Indeed, perhaps there is a slight lack of confidence in Nović, a doubly-edged issue when the responsibility of telling of these horrors is so great, when she feels the need to advise her reader that Ana continued to feel foreign and displaced in the seeming comfort of her new homeland. Already, in her careful showing of Ana’s behaviour, including the study of her relationship with her American boyfriend, her case is made.

Ana’s jigsaw pieces between Zagreb and New York fit out the harrowing truths of the third section, and there may be aspects of that which trouble. Certainly they should trouble, and Ana has already given her response to that reality to the UN delegation. The reader will not be surprised that the young adult Ana has a need to return to whatever is left of her homeland, nor indeed what she would try to find there. A happy aspect of her return is her reuniting with her childhood alter-ego Luka. Their friendship offers hope in a hard place.

Girl at War is undoubtedly filmic, but perhaps it is too soon. This is a narrative which is still playing out.  As someone said to Dervla Murphy “Nobody won our war”. In this startling debut, we hear the human impact, in terms as terrible and as important as those Primo Levi and others had to speak of in the Shoah. If Girl at War finishes rather abruptly for my thoughts, that may be right. Sara Nović has much more to tell.