John Moore
Birlinn (Edinburgh, 2015), in association with the National Library of Scotland and University of Glasgow Library: Hbk; £30 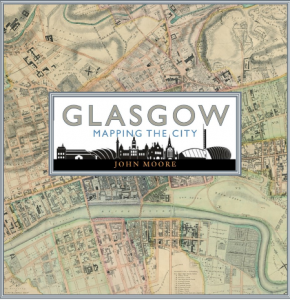 Likely every former Glasgow schoolchild – even those of us secretly from adjacent places like Renfrewshire – will have a notion of how Scotland’s largest city grew from its more easterly beginnings at one side of the Clyde. We all have a shadowy sense of how our city became something much bigger: more encompassing, and able for good, and for bad, to punch well above its weight. In John Moore, we have not only a very erudite specialist in cartography ­ (he is the present Collections Manager at the University of Glasgow Library) but we have a writer with a communicable passion for his obsession. Birlinn have chosen well, in this spectacularly beautiful book.

So what is Glasgow, as we come to know it better from maps?

“Geographical location and immediate topography can determine how each settlement develops. History, the character, beliefs and visions of leading citizens and the distribution of wealth also stamp their mark on a city’s identity.”

“The first map of Clydeside” (Timothy Pont, 1596) opens the book, and already he names nearly 1,400 places in the region, including “Glasco” with its Saltmarket,“Bridgegate”( ancestor of the present day Briggait)and its High Kirk north of the river. The very last map, accompanying the Epilogue, is of a very different sort – a detail from Alasdair Gray’s Hillhead (2011), coming full circle to Moore’s workplace campus. The journey between these two extremes is significant and often surprising.

The reader might reasonably expect the post-Jacobite Rebellion Military Survey (1753-54), the general charting of the city’s growth, and of course the Council Commission’s imposition of boundaries, all of which are fascinating but these are but a sliver of this book’s ambition.

What of the reason for the city’s existence, its continuing lifeblood, the Clyde? Consider the Watt chart of the river (1759), and compare it with the 1955 version, as shipbuilding died. In between trace the development of docks as the Second City of the Empire grew, with all the darkness and continuing legacies that still holds. See the river mapped by Scots in the lead up to WWII, and how the Germans charted it strategically a very few years later.  There is also the sign of happier times for the water with the 1988 plans for the City’s Garden Festival … a time that (any Glaswegian will own) marked a new confidence in the city’s hopes began.

Those same Glaswegians will speak with pride of their tap water (thankfully not from the still-polluted Clyde); the plans for piping their beloved Loch Katrine water are here. Alas, the city’s residents are perhaps not always best known for drinking their admirable water, and those who opine that anyone asking for directions in the city will be guided via pubs may have their suspicions confirmed by john Bartholomew’s New Plan of Glasgow (1886), copiously red-dotted with Public Houses, Licensed Grocers and more.

Hand in hand with the city’s undeniably sad history of alcohol abuse, its name has too long been freighted with a reputation for criminality, ill health and poverty, set alongside considerable wealth. Accordingly, there are Robert Perry’s 1844 “Facts and Observations on the Sanitary State of Glasgow”, plans for council housing, and the lines on the douce spaces of Pollokshields. The transport veins of the city are here, from routes for cyclists, to the construction of the first subway (perhaps surprisingly never extended in the newer “Clockwork Orange” planned in the 1970s), to air photo mosaics showing the development of the airport at Abbotsinch.

Frankly, there is nothing not to like about this book. The map-obsessive in your life needs it and your present-giving problems for your Glaswegian friends at home and elsewhere are solved. Most of all, you should have this book because it is wonderful. I’d say that even if I weren’t just a little biased. Bravo, John Moore and Birlinn.