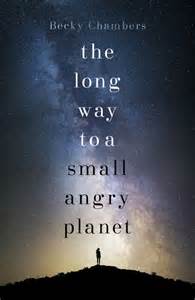 The Long Way to a Small Angry Planet is a science-fiction novel set in a distant future where humans have reached out beyond our solar system and joined the larger galactic community. It follows the interspecies crew of the industrial ship Wayfarer as they seek their fortune building a wormhole highway to a mysterious and dangerous planet in the galactic core. It’s not often that I read a Sci-Fi novel that is able to build a tangible, interesting universe and yet is also able fill it with tangible, interesting characters; Chambers’ is one of those rare ones that has a fully imagined world with a history, culture and people you want to immerse yourself in.

I don’t normally gush, but having just put down The Long Way to a Small Angry Planet, I want to gush about this beautiful book and its beautiful, grubby cast of misfits. I want to gush about their journey, not the ultimately inconsequential travel from here to there, but the personal, emotional and intellectual journey they take that brought me from there to here, here being a state of squishy joy. The plot isn’t anything ground-breaking, it’s very much a standard Fellowship-esque jaunt from point A to B, but, as with Frodo and friends, it’s what happens in between that’s so interesting.

The crew of the Wayfarer is a diverse, cross-sectional representation of the galactic community. The nature of an interspecies mix allows for a glorious range of non-binary gendered, differently abled, multi-faith people, and, interestingly for the genre, everyone isn’t white and straight. The story is fully character-driven, and everyone is important, emphasised by the point of view changes at the beginning of each chapter. This is not as confusing as it sounds, as each character’s personality is fully realised and they are present and captivating throughout, which makes it easy and comfortable to slip under their skin. The writing is charming and funny and even the most obnoxious characters are engaging. At several points while reading I found myself either laughing out loud or grinning from ear to ear at the antics of the crew.

Living in close quarters with everyone’s baggage, roaming from world to world and into some ideologically divisive regions of the galaxy generates complicated tensions that are more often than not dealt with by sitting down to a nice cup of tea and a serious chat . This might not be the most action- packed method of resolving disputes, but understandable when locked in a tin can hurtling through space. The characters are exceptionally self-aware, they are able to articulate their thoughts and feelings elegantly and in a compellingly accessible way. Dialogue is often profound and Becky Chambers manages to tease out both sides of discussions in endearing and memorable exchanges:

What happened to you, to your species, it’s . . . it doesn’t even compare.’
‘Why? Because it’s worse?’
She nodded.
‘But it still compares. Does it hurt any less, knowing I am in more pain?
‘No, but that’s not –‘
‘Yes, it is. Feelings are relative. And at the root, they’re all the same, even if they grow from different experiences and exist on different scales.’

What I found to be the most absorbing aspect of this book is the way it deals with the ‘Big Questions’: gender, sexuality, race, religion, war, grief, family, mental health, identity; everything is handled with a bold sensitivity, that is unapologetic in its opinion, yet totally inclusive and utterly accepting. War, crime and injustice, these things exist; this future isn’t a shining utopian society. But it’s the frictions, small and large, created by the interactions within and without the ship that drive the story. There may be anger and hope and desperation, but the crew of the Wayfarer know that the universe is still a beautiful place.