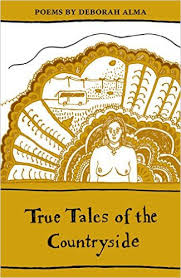 Having studied Creative writing at Keele University, North Londoner Deborah Alma taught poetry. At the same time, based in a 1970s ambulance, she was also operating as an “Emergency Poet”, which involved working primarily with people reaching the end of their lives and with individuals suffering from dementia.  Alma’s 2015 debut pamphlet True Tales of the Countryside is a fascinating, intriguing and intricate composition of 25 free verse poems with detailed and sensual accounts of sexual and romantic encounters, and an engagement with ageing. All of these take place in Shropshire and Wales’ rural landscapes. In these accounts, taboos are confronted with eyes wide open. The first two lines of this pamphlet read:

I put a pen in my cunt once
just to play with myself.

With such a daring and provocative opening, it is clear that Alma is writing for those who can appreciate such startling and vivid sexual imagery, with an intimacy of touch. These themes are further developed in the list poem “Getting It” where the repetition of the words “I tried sex with” is followed by “a space hopper,” “an old friend,” and “soft swingers”. These lists have the effect of ending each stanza with an impression of dissatisfaction. The fourth and final stanza concludes with the protagonist alone in her bed but with “a joy in my head.” “Getting It” is a poem which appears to search for sexual intimacy and perhaps something more, with the speaker concluding in each stanza that sex in itself is insufficient.

You kiss my breasts,
Sucking at my nipples,
Whilst calves from their mothers
Are forced to wait.

This poem offers a very explicit comparison between the sexualisation of human female breasts and those of the animal for whom nipples are used solely to feed her young. Alma may well be exploring not only the carnal but the increasingly objectified nature of the female body as it is seen in the 21st Century. Drawing this comparison, it appears that the poet is addressing the reader as voyeur and opening a debate, distinguishing between the conflicting ways in which a contemporary audience may view such images.

Alma further explores human nature and the inevitability of ageing in her work.  In “Chicken” she states:

We heal more slowly as we age,
don’t quite recover our old selves –
falter at the edge of pavements,
not even sure anymore
that we want to cross the road.

Such touching pathos demonstrates her ability to delve into sensitive topics without forsaking realism. As humans, of course we fear growing older and the inevitability of death. Alma sums  up in the poem’s final stanza. Not only there, but also in  “Fridge Magnets”, she depicts the realities of growing older, but this time in a positive light:

Middle aged women
who have had some pain in their lives
are very wise.

In sharp contrast with the previous poem, “Fridge Magnets” demonstrates that we also grow with experience.

True Tales of the Countryside is unequivocally a worthwhile read which explores the human experience  through universal themes of sex, love and ageing. Some will pale at her bold sexual images, but it is nonetheless difficult not to be intrigued by them nor not to appreciate her fearless exploration. Perhaps one of the most surprising aspects for many will be that that such explorations take place in a rural setting, thus giving the pastoral a very hard twist. Whilst some of Alma’s work may be controversial, it will also etch itself into the reader’s mind, prompting conversations for a long time to come.