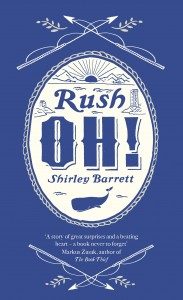 Australian Shirley Barrett is predominantly known for her screenwriting and directing, with her first film Love Serenade winning Best First Feature at Cannes Film Festival in 1996 and her script for South Solitary winning the Queensland Premier’s Prize in 2010. Rush OH! is Barrett’s first novel, chronicling the whaling industry in a small community in Eden, South Australia, in the early twentieth century. In particular, the novel details the extraordinary relationship formed between a pod of killer whales and a family of whalers.

Based on the real accounts of a man named George ‘Fearless’ Davidson, a seasoned whaler of Scottish descent, the novel unfolds through the eyes of his young, straight-laced daughter Mary. We learn of the difficulties and dwindling successes of the hunting seasons, and hear endearing tales of the various escapades of the whalers, as well as of Mary’s growing feelings for John Beck, a former Methodist minister with a dark past. Her stern yet honest character comes across with the writer’s humorous, but perhaps occasionally contrived, archaic choice of words:

I suggested as delicately as I could that [his behaviour] might be a consequence of his dipsomania and that, if he could adopt a more abstemious way of life, then indeed there might be a chance of our friendship developing into something deeper.

Meanwhile, Mary’s relationship with her rather mean and spoilt sister Louisa provides a comically realistic view of sibling relations, which becomes increasingly emotive as the novel progresses. We see Louisa’s petulant and selfish behaviour reflected in her refusal to help Mary with the extensive list of household chores, and her screaming fits over anybody touching the family sewing machine. However beneath her sullenness lies a begrudging loyalty to her sister, which is pushed to its limits over Louisa’s impending elopement with an Aboriginal sailor.

Drawings detailing particular quirks of the community, and authentic clippings from newspaper reports and poems, form a charming accompaniment to the snippets of local Aboriginal lore such as the bunyip, a huge water dwelling monster, and the belief that the souls of powerful human beings are reincarnated into killer whales. “Rush OH!”, named after the cry the locals gave after spotting a whale in the bay, also recounts the tragedies such small communities would face at the turn of the twentieth century, with loss of life at sea and at war being prevalent.

Despite the rich historical material and promising subject matter, I found myself yearning for more substance throughout the novel, and felt unsatisfied with the occasionally twee and often superficial manner of the author’s characterization of the community. Perhaps the central protagonist’s simple nature failed to inject enough excitement and drama into the story, and this element combined with humorous quips throughout the narrative made for an unsettling imbalance and separation between drama and comedy. The original accounts and subject matter offered the opportunity to deliver a visceral and complex story that never quite materialized. I felt that the clear dichotomy of the necessity of hunting whales for the purposes of survival being set against the uncomfortable truth of perpetrating such violent acts against these majestic creatures should have sparked a more compelling read. Meanwhile, the novel’s slightly mechanical love story felt somewhat predictable, and the different elements that Barrett introduced throughout the course of the narrative possibly cluttered the main theme of the book, though these tendencies are perhaps only reflective of a first novel.

Despite not quite delivering the potential drama promised by Eden’s history, the novel nevertheless provides a well-researched insight into life in Australian seaside towns and offers plenty of interesting anecdotes from the era. The research entailed into collecting details of the South Australian whaling industry would, no doubt, have been an extensive task, and Barrett’s humour, together with her interest and care for the history of Eden comes across clearly in the novel.