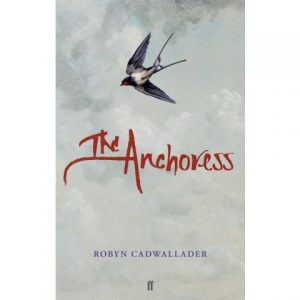 This is the first novel by Robyn Cadwallader, an Australian Medieval Scholar who has won several prizes and awards for poetry, short stories and reviews. She has also published a non-fiction book, based on her PhD.

The novel is set in the thirteenth century, in an English village. In the Middle Ages, an Anchoress was a woman who had chosen to withdraw from the world and spend her life in prayer and meditation, walled into a small cell called an ‘anchorhold’, usually within a parish church. The Anchoress would also act as a spiritual advisor to the villagers. When an Anchoress entered the cell, she was considered ‘dead’ to the physical world and a priest would often chant the offices of the dead during the walling in. Sarah, the Anchoress of the title, appears to have chosen this vocation out of grief for her sister who died in childbirth, together with guilt from an undisclosed event in her past. The reader is given clues that she is from a wealthy family, who live nearby.

The novel describes the daily life of Sarah in her new role, coming to terms with her Spartan existence and limited contact with the outside world. Her only daily contact is through a small window in her cell with her assistant, a woman who was chosen to serve the anchoress’ needs. Other windows adjoin the wall of the church nave, so that she is able to receive Holy Communion and to allow her some contact with the parishioners. Her life is governed by the Rule, known as the ‘Ancrene Wisse’, a guide for female recluses written by a thirteenth century predecessor.

The novel introduces several characters who live in the outside world and the narrative follows their stories in the context of their relationship to Sarah. These are Father Ranaulf, the priest who comes to hear her confession; Eleanor, a very young girl who attempts to befriend Sarah; and Thomas, the son of the local landlord, Sir Geoffrey, who is Sarah’s sponsor. Through exploring these characters and the parts they play in Sarah’s story, the novel sets up a tension between the everyday world and Sarah’s sequestered existence.

The reader becomes aware that whatever the past event was that led Sarah to taking up her role as Anchoress, it involved Thomas, who finds strategies to force his way back into Sarah’s life and, in doing so, transgresses all the written strictures of approaching her refuge. Rather than a sanctuary, Sarah’s cell becomes a trap which leaves her incapable of escaping his unwelcome advances. Sarah’s guilt returns as he provokes a powerful physical response within her.

There is always a decision to be made for the writer of historical novels. Should they assume the style and lexicon of language of the century in question, or rather attempt to evoke a sense of the past by other methods? The author of The Anchoress has chosen the latter method, which can be problematic when the language of current contemporary society describes concepts and ideas that may not have been understood in the same terms during the Middle Ages.

‘The young girl ran to keep up.

“I don’t know you. But you’ve got the same robe as Father Peter. I like Father Peter. He comes to talk to Sister Sarah, like I do. But he walks real slow ‘cause his legs are sick, Ma says. And you walk so fast! What’s your name?”

Some of the events in the novel contradict expectations of what would have been normal practice at that time. For example, I found it difficult to accept that Thomas would be able to trespass so easily on the Anchoress’ emotional or physical space. Surely someone in her position would have been more rigorously protected by the community? Whatever is the case, the reader certainly gets a sense of Sarah’s physical and spiritual vulnerability from the author’s skill in communicating the threat of Thomas’ presence.