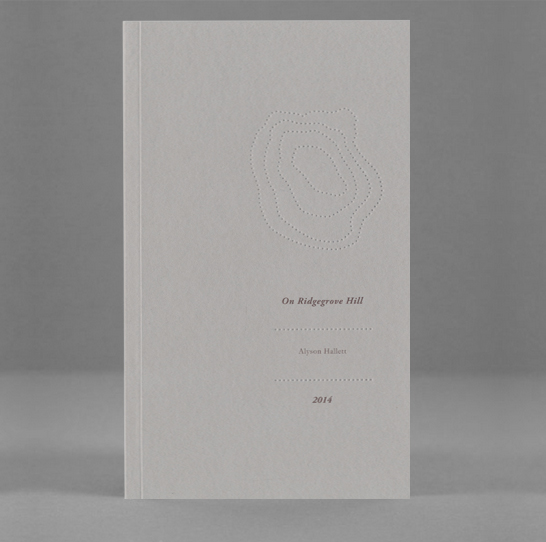 Increasingly, the passive voice in poetry tends to receive bad press. Some particularly ferocious critics are keen to strike out its very existence in verse. Like most polemics, the rhetoric contains truths and interesting pointers to alert the unwary. Also like most polemics, we might not always want to take such an extreme line. What if there might be a reasoned place for considerable passivity in verse? What if a poet had – knowingly and wisely – chosen to allow another poet’s spirit perhaps to rest comfortably on her lines? Or, more accurately, had she allowed his spirit that hospitality, embodied in a particular building and place?

In 2014, Alyson Hallett was the second Charles Causley poet-in-residence, and the first to live in his home, Cyprus Well in Launceton. Causley spent his entire life in that Cornish town, so there is much to be absorbed, both inside and beyond. On Ridgegrove Hill is Hallett’s third poetry collection.

I love the marriage of secrets
in this tree-hilled town.

This is an exquisite book, from its blind-embossed grey covers, its aubergine-dark endpapers, its just right scale, its classic Garamond typesetting, right through to Phyllida Bleumel’s airily beautiful design. All this gives space and respect to the words, and offers those qualities immediately. Ideally, we might like to see this consideration more often in poetry collections. Atlantic Press is to be congratulated heartily. This is a book to have and to hold. Let’s travel with Hallett :

I am Causley’s chauffeur now.
His happy spirit in the passenger seat of my car,

The two of us bumbling along country lanes, windows open,
the wide Cornish air speaking through ferns and trees.

Bleumel’s stippled, plan-like pages lead the reader on a dotted trail through the poetry, and it would be interesting indeed to learn at what stage she became involved with the poet – Hallett has a fascinating record of creative collaboration. From lines suggestive of mapping contours to architectural detail, the visuals ghost the words throughout. The whitespace is fittingly generous.

A house crawls out of darkness.

Juts a roof against the sky,
suckers glass to arriving light.

These poems chart the residency, not as a diary, but nonetheless with the echoed intimacy of a journal. The book’s tactile aspects and scale contribute to the feeling that this is a book to be carried and worked with through these places. As such, the poems are image-laden, and those images trace a contemporary world layered on Causley’s Cornwall. The seemingly mundane (the Co-op, Newport’s fish and chip shop) counterbalances the hedgerows’ abundance.

“I have a strange fondness for the T-junction”; poetically that retake on the outwardly ordinary is interesting, but it might intrigue the reader more had that not been the first line of a poem entitled “In Praise of a T-junction”. Here, as often elsewhere, I wanted Hallett to trust me more, to tell me less, then allow me to explore,

There’s no hiding here
the green-ridged hills define you[.]

Undoubtedly the poet had a joyous residency and this is a beautiful legacy. I would not wish her anything untoward, and surely poets do not have to carry a surly black dog; yet I suspect that these poems would be sharpened if Hallett could sometimes allow her reader to fall through that trap door, find a half-eaten mouse or smell unpleasant wormholes. Perhaps Causley’s spirit is overly benign.

There are fine things indeed – “Tomb-flowers to light up the day/ detonate the night” but I don’t need to be told when the poet is looking for the grave, or that “I think about researching Neptune”. Penelope Shuttle, in the heart of this collection, says:

[…] our poet’s flown his earthly nest

though I still asked his permission.

Niall Campbell pleaded “then let me be the whaler poet”; perhaps Alyson Hallett might, on another day, be the trespasser poet, who when that “ hour unbottled itself from the clock” can push the door without permission.