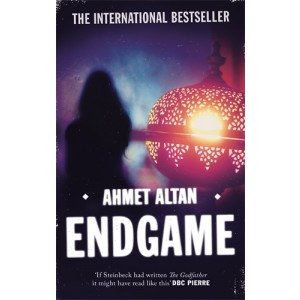 Ahmet Altan is a murderer. At least, he is in the eyes of the unnamed, enigmatic narrator who, having recently taken a life, spends his own final hours musing about the relationships between God, an author, and his characters. Part existentialist essay and part murder mystery, Endgame is a story that slowly but surely draws the reader in, before leaving them with a lot more than they bargained for.

For the most part, Endgame tells the story of the narrator coming to live in a strange seaside town at the behest of a woman he had only just met. The narrative dives headfirst into the world of that town which, it soon becomes clear, is only just clinging to stability, with the narrator acting as a wild card amongst the many factions that continuously appear. Each character eventually forms the basis of a subplot, thanks to the narrator’s changing relationships with each of them. Some of these relationships, such as his occasional trysts with the wife of a local crime boss, serve to push the narrative forward, while his talks with the local cradle-maker and chapters set after he became a killer form the basis of Altan’s philosophical ponderings. Throughout these chapters, God is given a thorough literary criticism, with religious heroes and morals questioned and examined in much the same way a work of fiction would be. To reveal exactly what sort of questions are raised would be giving a lot away, but needless to say Altan is deeply interested in the moral implications of fictional deaths.

The book itself is saturated with a thick, dreamlike atmosphere, particularly during the first act, before the full extent of what is going on in the town is revealed. Endgame is at its best when focussing on the world created within it, with lavish descriptions of the town and its surrounding landscape portraying an unreal, fairy-tale vision of an ideal coastal paradise, completely at odds with the ugly events that take place there with startling regularity. The structure of the novel itself serves to emphasise this, with occasional reminders that the voice telling us this story is little better than his associates. The main players in the town’s grand political game are all interesting and charismatic, and the relationships between them and the narrator are all compelling and fun to watch as they grow and change. His relationship with the town’s mayor, Mustafa, especially, leads to many of the more tense moments as the plot develops.

Unfortunately, the love story between the narrator and his potential lover, Zuhal, is the cause of many of the novel’s weakest points. Whenever a chapter focusses on the nature of their relationship, the story instantly becomes far less compelling. Her main purpose seems to be to reveal facts about the other, more interesting characters; the only thing truly separating her from the myriad other such protagonists in fiction is the long-distance element of her relationship with the narrator. Similarly, the chapters focussing on Altan’s existential questions can have a similar effect, grinding the actual story to a halt in exchange for rhetorical questions. However, on a second reading, it’s astounding to find how much of the story’s themes were hidden inside lines that had initially appeared to be self-pitying whines from the narrator.

All in all, Endgame is definitely worth reading. The setting, and most of the characters, are all expertly crafted, engendering a unique feeling which lasts until the final chapters.  While it does occasionally lose momentum, the plot has more than enough intrigue to leave the reader wanting more. Thankfully, the larger questions brought up by Altan all tie into the central themes of the narrative, and greatly reward anyone who returns for a second helping. Endgame is a great novel, which is both philosophically deep, and yet deceptively accessible.