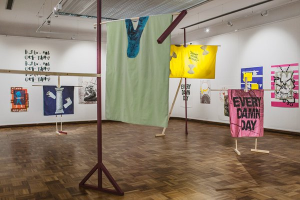 The artists involved with Poster Club have come and gone throughout the years, but the aim has always been the same:  to meet up and create posters by screen printing. For all of the artists involved, with the exception of Turner Prize Nominee Ciara Phillips who is primarily a printmaker, this work differs greatly from their separate artistic norms. They all agreed, however, that the collaborative process of screen printing really lends itself to working in a team and is a very fluid activity. Given the fast paced nature of the medium, they admit that if they simply do not like their output, they put aside the work and use it later, possibly even printing over the original image. This approach of reusing material and the contingent process was said to be incredibly liberating.

It would be safe to say that this isn’t your typical exhibition from Cooper Gallery. Firstly, the artists installed the work themselves, taking full control of their aesthetic and its presentation. They responded directly to the space facing the entrance and proceeded to mark out their remarkably large “finger font”, to be painted with matte black paint by illustration students before the opening night. This font was created in Shanghai and sprung from an interest in the fact that the Chinese alphabet is a series of pictographs, yet it is our letters which look like images to them.

Following on from this large-scale work on the ground floor, we are led past a plastic print of bricks which completely fills the largest wall of the stairwell. The artists had the prints produced in China but they didn’t realise that they would be printed on plastic. Believing in sustainable practice, the print was used anyway and pasted over in various places by other similarly made prints to create a colourful mural.

On the first floor of the gallery, we are met by a series of typographical posters and more painted text on the walls, this time much more varied in approach. However, the big attraction is the main gallery leading off from this thoroughfare; Poster Club have really taken advantage of this large open space and have managed to create a happily interrupted flow which never existed before. Staying true to their culture of reusing materials, they made use of some wood left from the previous exhibition in the gallery and created largely surreal humanlike structures from which they have hung their poster garments, resembling brilliantly patterned tabards.

Apart from their use of bright colours and playful imagery, it is difficult to describe the collective’s work as a whole as the posters were mostly created entirely separately from each other. However, as you spend more time in the space, you start to notice common elements – pieces of type, backgrounds, speech bubbles – appearing in unrelated posters from across the room, reinforcing their lack of finality This lively approach was apparent from the moment you stepped foot in any of the spaces that Poster Club had occupied,  their sense of humour permeating every inch of the room and allowing you to relax around the work.

The strength of “NEW Wheat NEW Mud NEW Machine” strength comes largely from the life and soul of the work, beginning primarily with its creative process. There is an atmosphere of excitement that surrounds the work and inspires you to forget the stereotypical strictures of traditional 2D work. Encouraging cultural exchange within the arts and having faith in artists who work in a very unpredictable and responsive manner, Cooper Gallery have shown a refreshing outlook on what a typical exhibition in the arts can be.