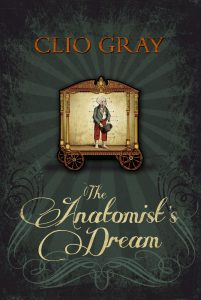 The Anatomist’s Dream comes with impressive recommendations. It was long listed for the Bailey’s Prize for Fiction earlier this year, and nominated for the Man Booker prize in 2015, when it lost out to A Brief History of Seven Killings.

Clio Gray, the novelist and short story writer, is known to create worlds set in intriguing, historical landscapes which she peoples with bizarre characters. The first of her Stroop series is set in London and Italy of the 1700s. Her latest work, Deadly Prospects, part of a Scottish Mystery series, is set in the Highlands in 1869. In The Anatomist’s Dream, Gray plays to her strengths. The events of the novel take place before, and lead up to, the German Revolutions of 1848-49.

Philbert, the lead character is an unusual boy, born with a taupe on his head and possessing an eidetic memory. Orphaned at a young age, he is welcomed into Maulwerf’s Fair – a bevy of peculiar characters – Lita the Dwarf, Hermann the Fishman, Tomaso the Toad Boy, and others, led by Maulwerf the Carneous Mole. The Fair makes three-year circuits in Germany, Prussia and the Austro-Hungarian empire, creating routines inspired by their oddities. As time passes, Philbert develops familial bonds with other members of the troupe, the closest one being with Hermann (“the saddest man that Philbert had ever met”). As they travel, they are joined by a Hesychast named Kwert, who is also a “Tospirologist and Teller of Signs”. Kwert predicts great things of Philbert in their very first encounter. But, as the omniscient narrator repeatedly tells us, great doesn’t necessarily mean good.

Foreshadowing is a well-loved device of Gray’s and one she uses unsparingly. Every other chapter ends with hints of the huge consequences that will follow Philbert’s actions. After a point, we have to take the author’s word for it. The plot doesn’t satisfactorily substantiate the author’s prescience. The dim outlines of Philibert’s future remain dim. If it were not for Gray’s exceptional style, [“Winter ground on, a dog within the wheel of the seasons, bearing frost in its fur and a howling snarl of wind, the snow barely having time to settle on the frozen ground before it was snatched up again, a hound that would not loose the broke-backed rabbit – still squirming – from its hold”], the novel might have been reduced to an exercise in sentimentality. Her language is rich – replete with imagery and rhythms. She also has a wonderful eye for detail, which effectively holds our attention.

However, she bestows equal focus on everything – from the bizarre shapes of her characters, to the casual rapes of young girls, from gory murders to costumes, or the German countryside. This tends to distance us emotionally. The characters and their fates seem like studies of curiosity, preserved in formalin. Rarely, and then in unusual places, does the tragedy shatter its glass jar – one instance being the death of Raspel, Philbert’s kitten. Towards the end, we are made to understand that Philbert is no longer the Little Maus; the world has happened to him.  However, the novel closes with a sense of repair rather than rupture. The last few chapters seem rushed, as in a whodunit. We are left with an ending which seems entirely too neat and comfortable, and scratches through all the foreboding inspired in us earlier. All said, The Anatomist’s Dream is a worthwhile read. For the duration of its reading we inhabit a strange time and place, live and move with people we are unlikely to ever encounter, and are exposed to a language at once musical and precise. Its only flaw is that we are left waiting to hear its pitch soar to a crescendo that it never quite attains.