The 2016 DJCAD Undergraduate Degree Show will be displaying, amongst others, pieces by the Time Based Art and Digital Film soon-to-be graduates. This review will be looking at the works of three artists in that course.

James McMaster’s work focuses on wildlife, more specifically the way animals are observed and portrayed in culture. The first piece in the line of sight as one goes in to the space is a rocking horse. The toy, with an altered appearance, serves to starkly contrast the real visual of the animal 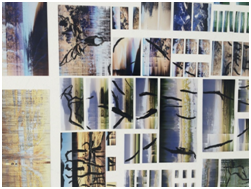 against an old and well-known (mis)representation of it. The stone slabs next to it slowly develop the theme into the portrayal of animals for decoration, the manipulation of nature for the purpose of reproducible aesthetics.

It is on the third piece, however, that McMaster’s work most poignantly displays his driving concept. Images of landscapes and animals are displayed in the format they would be most commonly seen in our culture; Google Images. The artist calls attention to the disconnection between these images and reality by causing varying glitches on different copies of each photograph. It successfully points at the scarcity of faithful wildlife representations by tapping into a visual language that is familiar and easily decoded by the viewer.

Mark A. Small’s concept is clear and strong within the main piece. Brass plaques with names of different community groups, which Small has visited, are attached to a map of Dundee. As the viewer touches a given plaque, corresponding lights are activated on the map and sounds of that 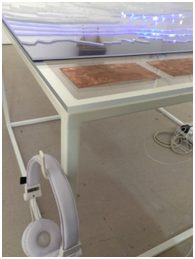 particular group can be heard through the headphones. The well-functioning digital technology within the map is put into contrast with the rustic nature of the apparent stone tablets around the space which describe each community group in detail. If the room feels like it carries more than needed it is only because the map piece seems so complete. It allows the audience to visually understand and embody the perceived importance, presence and connectivity of these groups in Dundee. The descriptions of each community becomes superfluous in light of the insightful and tactile concept. Despite the excess, the piece is stimulating. The craft of putting the map together, alone, is masterful. Transitions between lights, music, local recording and the viewer’s interactivity are seamless.

Lucy Young developed a space that, despite taking a much more simplistic form, synchronizes its concept and materiality subtly and completely. While one screen displays the daily documenting of her routine through pairs of photographs, the other does the same with a video piece. The latter is edited with no particular focus, it comes in and out of inconsequential and unnoticed glimpses. The editing strikes a captivating rhythm, and alongside the framing, makes the viewer feel like a quiet and curious outsider. Though Young cites Jan Postma as one of her influences in photography, the inspiration is even clearer in the shots taken for the film: curious, relaxed and thoughtfully fun. 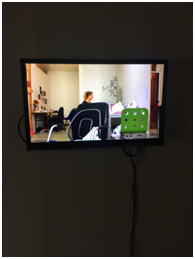 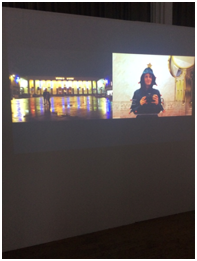 The pairs of photographs work well for their individual look but truly transcend the format when the viewer searches for the relationships between each pairing. As one watches through the sequence of slides, the mind cannot help but to create narratives and lines that connect. Though perhaps oddly arranged in the space, the pieces still develop an environment of calm and curiosity. Young’s original drive was a very personal exploration of mindfulness and tranquility, resulting in a space that skilfully and gently communicates both states. Her piece is a standout highlight and by far the most engaging of the trio.

All three pieces provide fascinating insights into visual representation and experiences of embodying the image. Together they make for a curious, introverted and gently thoughtful journey.