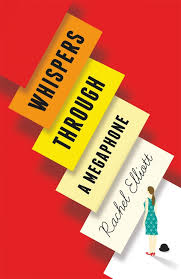 How do we measure our success today? When do we know our lives have been fully lived? Amidst the noise of constant communication, what does it mean to whisper? Rachel Elliot’s cacophony of social anxiety throws these questions in our lethargic faces. Whispers through a Megaphone is the author’s debut in the written word. She shares the same profession as one of her protagonists, Ralph Swoon: psychotherapist. Upon finding out Elliot was a psychotherapist I felt the keenest ‘of course’ moment, because this novel, with all its quirky yet quantifiable characters, is nothing less than a study of the contemporary human condition. I am convinced there are patients of hers out there reading the novel and thinking ‘was that me?’

The novel follows the story of two types of extreme character; the introvert and the extrovert. Miriam lives a life of insulation from the outside world and has not left her house in years. She lives in the fear that one day she may turn cuckoo like her mother. Sadie is unstoppable, incontrollable, a go-getter in the most unsettling way. For Sadie, the act of tweeting and blogging is treated as a character trait. It would not feel right to picture Sadie without a phone in her hand.

Twitter becomes a part of the novel. This is where literature is heading. Elliot’s novel tackles the means by which to treat this new player in our social games. Social media – particularly Twitter – is a gear of the story’s mechanism. Even the simplest detail, such as one of Ralph’s psychiatric patients knowing about his life through his wife’s blog, is portrayed and treated with a Kafka-esque apathy from all of the relevant characters except Ralph himself. It has become so commonplace that it does not feel so much like the intrusion Ralph believes it to be. There are parts of the novel where we see a long succession of tweets between Sadie and her followers and friends, and the reader finds the name of the patient. There is nothing cruel or creepy in the tweet, but that little kernel of voice sets something in our minds.

This in itself is harmless, but, in the context of the novel, it is frightening. It sits there like the smallest of elephants in the largest of rooms

Away from this, a new technique that Elliot employs is her use of tense. Past present future. Yet this novel depends deeply on this technique as road signs on the journeys of the protagonists.

“That was Sunday. Today is Tuesday[.]”

What a wonderful way to knit the two narratives together. Ralph’s story is set predominantly in the past tense, whereas Miriam’s is set in the present. So, when this little grain was flicked up at me, I understood the momentum of the novel.

Elliot’s narrative spark, her diagnostic pointers, her psychoanalytical prose, all mould together to form a novel that reads as quickly and as personally as a short story. I did not feel that I truly lived within the characters as one does with a novel, but felt that I was permitted only a brief observation in their small moment of disorder, in keeping with the psychoanalytical nature of the novel. Further to that point, Elliot brought in that same feeling social media has given us; we know everything there is to know about the lives of our friends, but we never truly know them. We are all observers of others hoping that in return we are observed ourselves. By the end, after a fair level of catharsis, Elliot leaves a fleck in the back of your mind, the questions asked at the start of this review. We are left knowing that: “When someone speaks loudly, it doesn’t mean they have found their own voice”