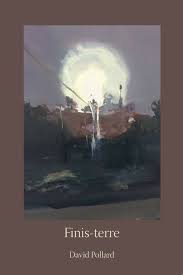 A Poetry Society Recommendation, David Pollard’s Finis-terre is an examination of mortality and creativity as the poet-narrator reflects on life and death while standing at a finis-terre – the end of the world. Spending half his life in Galicia, Northern Spain, Pollard has sailed past the Costa de la Muerte, where many sailors have perished, as they

oar the long seas skyward, westward
in our pale glance, always unable to face round
against its threatening jaws [,] (VI)

making him familiar with the Iberian Finisterre peninsula, which juts out into the Atlantic and thus appears to be the end of the world. Pollard’s ten part poem then moves from midday to midnight, the end of life and land; the narrator finds clarity in this darkness, all pieced together with recurring images and allusions.

The piece opens with a quotation from poet Edmund Jabés, “Your story is that of the waves, which break at our ankles and sometimes, whip our faces. One of the same story, one and the same wave”, and also Stéphane Mallarmé’s preface: “Certainement subsiste pr´sence de Minuit” / “Certainly a presence of Midnight subsists.” This structures Pollard’s poem as we are introduced to the two central metaphors of the book – the first being of life represented in the timespan of one day, rendering midnight analogous with death subsisting in all our thoughts. The second is of death being akin to the shared experience of standing before an endless expanse of water or the unknown:

From hand to hand each note
buys us a moment before sunfall,
Indian skyfall, here on the rocks
facing at last the spray that wets
the living eye at finis-terre. (IV)

This conception of life as one day pushes the poem towards its midnight conclusion as we begin with the then aptly-timed contemplation of death in midlife:

The dead of nothing doing is midday;
the waiting highpoint of a sunfall’s
quick electric thunder flecks and strangles
with the sudden chatter of its language. (I)

However, death is not portrayed negatively, but rather as something poetic: “Midnight, almost lightless, has its colour also” (VIII). This acceptance of mortality is rooted in the narrator’s creativity as he argues that death is a muse:

The relationship between creativity and mortality is united in the poem by the recurrent allusions to Greek mythology, particularly to Hades and Orpheus, who appear most frequently in Finis-terre. Hades, God of Death embodies mortality, while Orpheus the musician and poet, represents creativity with its own relationship with death.  Cementing their connection the narrator writes,

Again death’s inevitability permeates the poem. The bird struggles against the wind, but this is not to be construed negatively. The poet uses death as inspiration; there is clarity in art as

Only the muse can tread the rocks
– the dead and sea-welt rocks –
with him in peril to a new counterpoint
and sudden nakedness of flesh and eye
and word
and word. (X)

Pollard’s poem goes against the “idle thoughts” which “can stopper up the silence”, distracting us from our own contemplation of mortality as we attempt to deny death by meaningless diversions. Pollard faces death head-on, tackling one of poetry’s biggest topics next to love. His poem, whilst separated typographically, is made whole by stunning imagery and allusive patterns. All of these combine to reinforce his stance on creativity and death while each and every numbered section provides a brilliant standalone examination of death.