This year’s Art, Philosophy and Contemporary Practices exhibition showcase some great talents; all have produced a variety of artworks with deep, thought-provoking themes, this review offers a quick journey through the displays to give you a taste of the work.

Craig Black has used the sense of touch, associated with his disability, into a body of work that tells of the artist’s life and struggles. As the viewer wraps their hands around his ceramic pieces, they would find the artist’s own physical imprint on the ceramics, and would obtain a sense of the artist’s feelings, struggle and life journey.

Linda Bolsakova’s use of soil, light and natural plants (dead and alive) links her 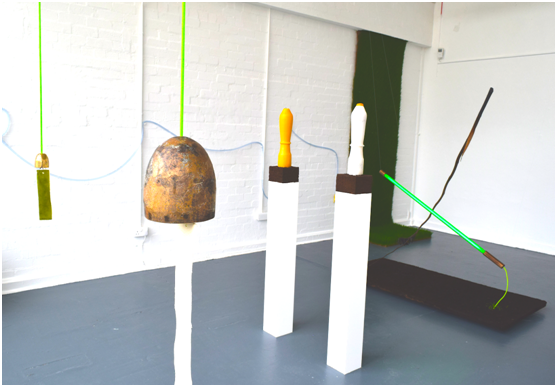 experience of family loss to the broader thematic of life and death through the four seasons, producing a body of symbolic sculptures representing the cycle of life, death and resurrection. Gentian Rhosa Meikleham’s musings on death are different. Most of us feel warmth and loss whenever we think of our childhood. But Meikleham didn’t only lose her childhood but also close members of her family. In her evocative sculptural works, swings move by themselves, their movement portraying a sense of loss and emptiness as well as of memories hanging in the air, unreachable.

Edward Parkes deals with violence and its effects that might result in the loss of life but which can, ironically, also turn victims into a mere statistic of crime. This cruel irony is represented literally in his work by the many slips of paper printed with names with the date of death. Paul Vermeulen also deals with violence. He has chosen to portray images of refugees through prints of their faces that show their immense suffering; these are accompanied with short but shocking sentences about the cruelty of reality and the failure of humanity. 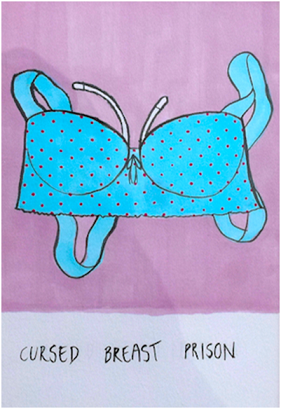 Eilidh Mitchell has used sarcasm as a tool to raise feminist issues, exploring the impact of nature, beliefs, social and political systems on changing attitudes towards femininity in sculptural pieces and drawings that contain witty texts conveying her disappointment, in dark and comical ways.

Hazel Holloway attempts to find links between the self and external matter.  In her work, the act of throwing, and the inner feelings and physical forces it entails, is transformed into a sculptural work of clay pieces thrown onto a wall, the signifying both action and emotion combined. Eve Kerr uses liquid clay on the body to examine the density, form, stillness and passivity of the clay media in conventional sculptural deployment, challenging the characteristics of the medium and the portrayed reality.

Helen King addresses the relationship between the aesthetics of place and such effects on the public. She explores these issues in an installation whereby a bare concrete block seems almost to topple over. In doing so she poses questions about aesthetics and practicality, and about creating ecologically sustainable 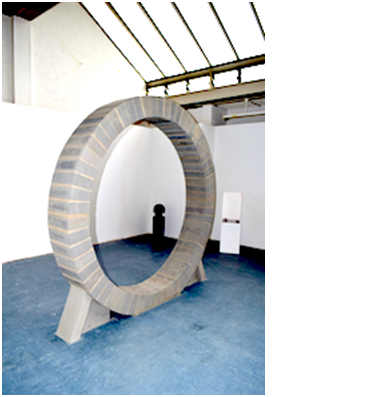 environments in what may be considered as ugly buildings. Inspired by her journey through the old tramline route in Dundee linking the destinations “Stannergate” to “Stargate” – the latter a typing mistake the artist claims to have found in archival documents – Lise Olsen transforms her studio space into a stargate. Here the spectators’ time and space are altered in an installation that is also accompanied by a disorientating soundtrack of sound fragments. 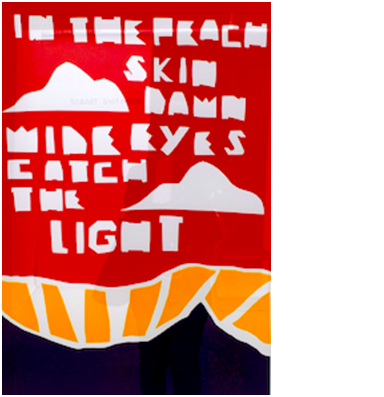 Kristian Thomassen has produced a series of prints consisting of aphoristic yet resonant sentences and abstract symbolic images, which together form a hesitant philosophical and aesthetic enquiry into the fragility of reality and meaning in being. The bright colours used and their web press font forces the viewer to spend extra time taking in the depths of the artworks.

It is a joy to be amongst such diverse art from the APCP course this year. Thought-provoking ideas and clever usage of media create a fascinating exhibition that will keep you hooked for hours.