This year’s selection of work from the Time Based Art and Digital Film faculties is slightly more fragmented than previous years. The pieces are spread throughout DJCAD, sharing many areas with Fine Art works. Rather than diluting their impact, however, this allows the pieces to be shown alongside other pieces that match their aesthetic or theme which perhaps would not be present if they formed a single collection. For the TBA enthusiast this adds a little extra work, so to assist in this I have added the location of each piece with their titles. 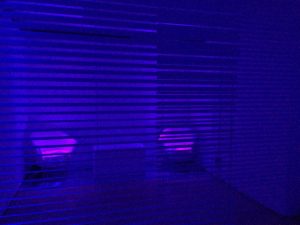 Deliberately separated from other works, Jewel System feels less like an artwork to be externally appreciated and more like a world to be entered into and interacted with. McCusker has a small room to herself that features obscuring venetian blinds and comfortable chairs, all bathed in a deep purple light. Permeating this space is a constant whisper, at once both dreamlike and unnatural. It is no wonder Jewel System gives the impression of being a discrete environment as it engages with the digital landscape of the internet. While familiar to us all in its abstract form, there is a sense that McCusker’s piece is attempting to materialise the digital, to make the participant physically aware of the thoughts and feelings that permeate this unseen world. 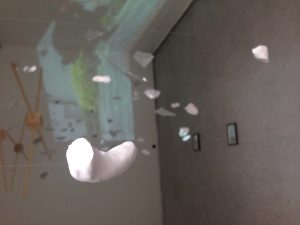 A combination of both sculpture and film, Ford’s piece is a delicate balance of light. A film is projected through hanging pieces of pottery and broken mirrors, shattering their reflection through the space. This is reflected by the breaking ceramics seen in the actual film, resulting in a continual process of fragmentation occurring in front of the viewer. This process, along with the titular Damaged Goods provide a metaphor for psychological pain. The splinters of pottery and glass are hung from wooden frames, highly reminiscent of a child’s mobile. The creative elements seem to be a response to and remediation of this implication of childhood trauma, with the white ceramics and focus on light lifting the viewer out of the depths of despair. 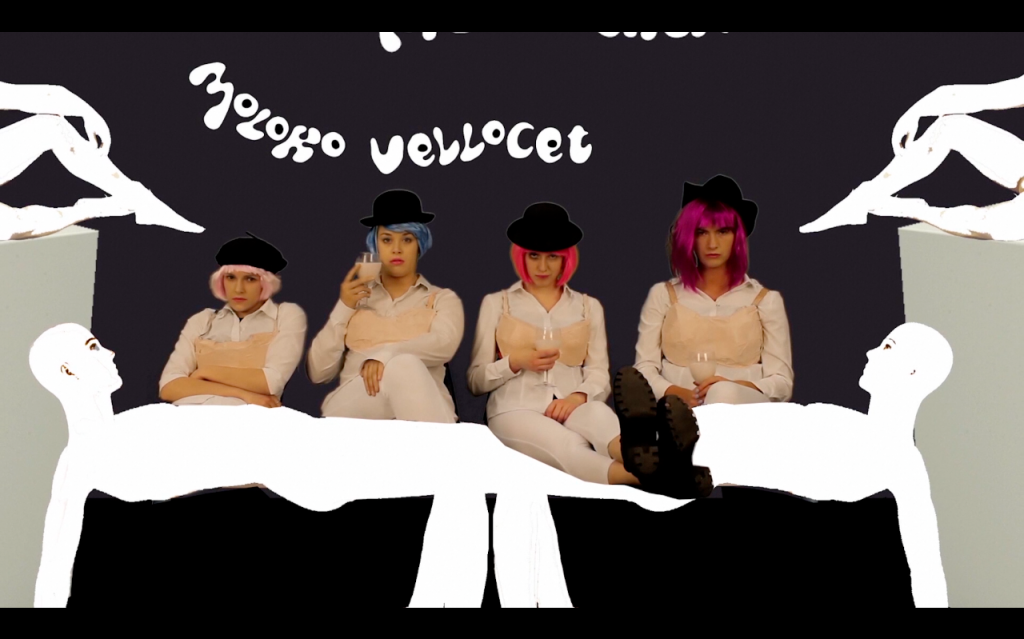 Delves’ work consists of two segments. First is a series of still photographs of women dressed as celebrated male film characters (e.g. Rambo, The Matrix’s Morpheus, etc.). The second is a short film with parallel clips featuring gender swapped characters with surreal green-screened environments, interspersed with typically female commercials being lampooned by recasting their protagonists as men. Both mediums allow the artist to engage critically with the sexual politics that are ever present within mainstream culture. Stand-In is not a biting satire however, rather a light-hearted take on the matter, and a likable charm radiates from the piece. It may question the viewer but never forgets to do this in an entertaining manner. 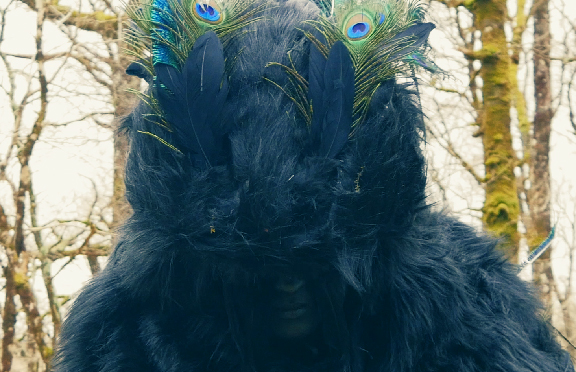 Elsewhere is a projected short film, making it the most traditional TBA work. This is not a criticism, however, as the piece displays much creativity within the chosen format. The film follows a selection of anthropomorphised woodland creatures in an almost spiritual journey. What is immediately striking is the beautiful design of the animal costumes, which combine a highly stylised outline with natural materials to create an atmosphere of magical realism. These creatures are eye-catching, but the film is not lazy in its use of them, being effectively and engagingly shot. Except for the animals, the focus of Elsewhere is on atmosphere, with the loose structure giving plenty of time to absorb the world and emotion being built within the film.

These of course are only four of the TBA works on display, however, even amongst these there is a considerable amount of diversity, with each piece seeming distinct and fresh.