The Animation section of the DJCAD degree show never fails to impress. There’s a palpable excitement as you pass through the Cooper Gallery and lower corridor; the various posters displaying background art and character sketches track the development from rough sketches to the sleek final product. This year’s work continues to raise the bar with a polished and confident array of show reels which can be seen in the Crawford Boardroom all week. 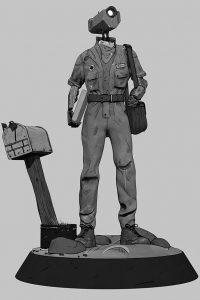 One of the standout films, and not just because of its tired, grey aesthetic, is “Post” (Adam Balson, Laura MacMahon, Cameron Mitchell, Andrew Scott, Eva Strautkalne). Adopting a somewhat starker atmosphere than the other works, we witness a robotic mail man deliver the same parcel over and over, satirising repetitive and circular processes in the application of technology. The outdated and dusty mail room is like a time capsule with aging mechanisms emphasised through the sound design; the broken fan and grinding conveyor belt operate like a cuckoo clock, kicking into life every time the parcel triggers their purpose.  The lighting in this short film is also of a high calibre as a time lapse is simulated through the moving waves of sun that threaten to expose the forgotten, hermetic environment. The gestural precision of the mail man, through his singular blinking lens and slight head movements, imbues the character with real humanity, making you sympathise with his curiosity and plight when operating under the mindless system.

What comes out of the collection of films is a common concern with the automaton. In “Drone” (Stephen McAdam, Magda Radoch, Vicky Stepehen and Connie White), a mystical forest of earthy reds and electric blue is menacing in its depth and delicate details. The metal carcasses abandoned to the shadows hint at another presence in what might at first seem an evocation of a folkloric past.  This post-apocalyptic version of Scotland envisions the organisation of people in clans. Pushed back into the wilderness to escape the drones which have overrun cities, they live organically off the land, reprogramming the old and threatening technologies to their benefit. A close scare with a drone forces our lead huntress, Fia, to intuitively mimic an animal is further testimony to the dexterity of the animation. 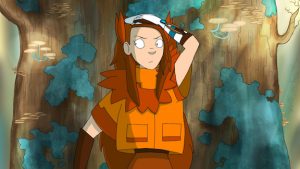 In “Juniper” (Jennifer MacNab, Lorna Robertson), the relationship of myth and technology receives similar treatment albeit in an inverted manner. The towering paradigm of future cities greets our hero who is then whisked back to a different time in the dusty and abandoned house of her aunt which she is to occupy (with the not so friendly ghost of her aunt for company). Her mission is simple: to save whatever magic is left in the city, which the mechanical police force is dissembling. The effortless humour of the characters leaves you desperate to see more.

The films all share a playfulness which is well balanced with very competent character and location development, quickly creating stories that can be instantly accessed and enjoyed whilst laying the groundwork for further development of these concepts and characters. The collaborative nature of all the films emphasises the talents of the year group across concept, character, background design, 2D and 3D animation. The delightful body of work they’ve produced this year is well worth your time and is likely to signal what is just the start of successful careers.