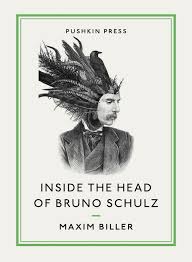 Maxim Biller was born in 1960 in Prague. In order to escape from The Prague Spring, his family emigrated to Germany in 1970. There Biller studied literature, then got involved in journalism which subsequently brought him the Theodor Wolff Prize, one of the most prestigious German awards in the field. An author of several story collections, many critics describe him as Kafka’s disciple in his attempt to fuse the realistic and the fantastic together, some going as far as to claim that he is even beyond Kafka. His themes focus predominantly on societal alienation and existential anxiety, the greater part of which seems to spawn from the catastrophic German-Jewish hatred and the sad background of WWII. Yet, ever since his novel Esra (2003) – which was temporarily banned in Germany because of its characters’ close identification with real-life people –  Maxim Biller seems to have a fancy for getting into people’s heads and their personal affairs.

His newest book, Inside the Head of Bruno Schulz (2013), is a 60-page novella which obviously pays tribute to Bruno Schulz, himself a 20th century Polish writer of high calibre and a winner of the Polish Academy of Literature’s Gold Laurel award. The novella draws a partly biographical and, paradoxically, a highly Kafkaesque account of Schulz’s life and vision. The year is 1938 and the setting is Drohobycz, a few years before the place became a World War II Ghetto where Polish Jews were persecuted during the Holocaust. This dark and frightful stage set stands at odds with the outwardly simple burlesque-like plot of the story.

A man claiming to be Thomas Mann arrives in town. Professor Bruno Schulz, believing he is an impostor, resolves to make matters clear by sending a letter to the real Thomas Mann. The plain storyline is adorned by the protagonist’s reticent individuality and baffling mind. Bruno is engulfed by unknown fear, ‘a grey lump’ in his belly; he never leaves his basement office. His students, like vexing woodpeckers, repeatedly peck at his window.  Bruno himself often walks on all four and even growls … “Praise be to him who creates strange beings.”

Biller’s narrative is particularly rich and unforgiving in the representation of his characters and this seems to me the strongest quality of the otherwise blank and somehow barren diegesis. Bruno believes that Thomas Mann’s double is not the only person in the province who has lost his wits.

It began early with my sister Hania, and my father was in even more of a hurry to leave the world. Long before his death, he resorted to that in-between realm where … human beings, animals and plants could communicate without words.

But it is Bruno’s head which is full of these bestial, hard-to-digest images, of “large black lizards and squinting snakes, as green as kerosene and with evil grins” slithering out of the walls. To Bruno, the students, Helena Jacubowicz, Hania, and the rest of the supporting characters are animalistic and simian-like, but even more revealing is Bruno’s conversation with Theo and Hermann. The insane phantasmagorical world of the main character is exactly the reality of Biller’s novella and the reader needs to adopt the same aesthetic vision in order to penetrate and grasp its form.

Thanks to Pushkin Press, Inside the Head of Bruno Schulz has just been translated into English by Anthea Bell, alongside two stories by Bruno Schulz himself, “Birds” and “Cinnamon Shops”. These seem to contribute immensely to the style and context of Biller’s own story. The former tackles the avian world deemed so essential to Schulz’s writing, whilst the latter corresponds to the imminent psychological brooding of the lonesome self. All three construct an amusing fictional world and the attuned reader will surely descry the need of a somewhat more engaging plot, but will indubitably enjoy those strange whims inside the head of Bruno Schulz.